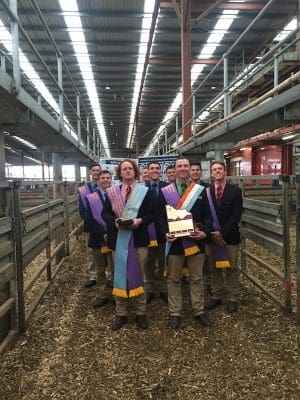 Murray Bennett of Landmark in Wangaratta was announced the 2017 ALPA Victorian Young Auctioneers Competition winner, with Joe Allen from Elders in Euroa named Runner Up.

Both Murray and Joe will represent Victoria at the 2018 ALPA National Young Auctioneers Competition held at the Sydney Royal Easter Show.

The competitors were selected at an ALPA auctioneers school held in June at Bendigo.

The competition followed training to improve the contestants auctioneering skills through voice conservation and care from industry renowned speech pathologists and coaching from experienced auctioneers.

“Training young stock agents is an important part of what we do at ALPA”, said Andy Madigan, ALPA CEO. “We are investing in the future of our profession and industry.”

The competitors took their place at the rostrum and sold commercial cattle that had been sourced locally by the Pakenham Stock Agents Association. The cattle were judged by Robert Radford prior to the competition as part of The Royal Agricultural Society of Victoria (RASV)- Prime Stock Competition. A large and excited crowd watched on as each competitor sold their three lots.

Three judges were selected to determine the winning auctioneer based on their industry experience and strong selling backgrounds with the competitors being judged on diction, values, voice and manner.

The dinner is a celebration of the agency industry and the young auctioneer’s achievements.

A highlight of the night was the charity auction, conducted by last year’s ALPA Victorian Young Auctioneers Competition winner Toby Newnham of Elders in Swan Hill.

The funds will be donated to the John Logan Foundation, a not-for-profit charity that offers financial support to people diagnosed with cancer. The Foundation assists by contributing to the cost of prescribed treatments and procedures that are not available on the Pharmaceutical Benefits Scheme.

ALPA announced that 18,356 was raised at the dinner and competition.