Are dingoes the answer to Australia’s feral cat and fox problem?

A new study headed by a scientist from Murdoch University’s Harry Butler Institute has focused attention on the question of whether dingoes can help supress the impact of feral cats and foxes. 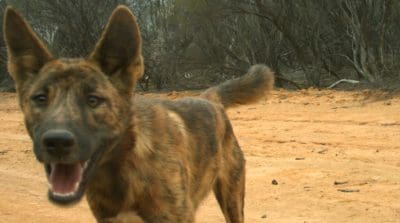 The study looked at the key differences and overlap in diets of the three-predator species, with results leading to a conclusion that because of a low degree of overlap, it was highly unlikely that dietary competition with dingoes would supress cat and fox numbers.

With 33 mammals, nine birds and three reptile species listed as extinct since the arrival of Europeans in Australia in 1788, the continent has the highest rate of extinction anywhere on the globe.

This devastating figure is largely due to habitat loss from land clearing, grazing and altered fire regime, coupled with the introduction of predators including the domestic cat and red fox.

Professor Trish Fleming, Director of the Centre for Terrestrial Ecosystem Science and Sustainability at HBI is lead researcher of a new study that’s reviewed 157 Australian cat, fox and dingo diet studies to help inform the question of meso-predator (feral cat and fox) suppression by dingoes.

The national team of co-authors investigated key differences and overlap in diets of these predator species to understand their current diets and how they have changed over time, and across the country.

The findings, recently published in Royal Society Open Science, provide a comparative analysis of the diets of all three predators and identifies environmental factors that influence dietary overlap.

Professor Fleming said that the results, based on almost 70 years’ worth of data and almost 100,000 samples, show distinctive diets for dingoes and feral cats.

“Cats consume mostly birds, reptiles and small mammals and are also reasonably flexible about what they eat, while dingoes consume more medium-sized and large mammals, including livestock.”

“Foxes show substantial dietary overlap with both cats and dingoes. Their diverse and opportunistic diet means they will simply switch food sources to mitigate food competition with dingoes,” she said.

These results suggest that all three species would rarely compete for the same food items.

“It is therefore unlikely that dietary competition with dingoes would suppress cat or fox numbers.”

The study further reinforced concerns about the consequences of predation by feral cats and foxes on threatened species.

“We know that cats and foxes are both a serious conservation threat to Australian native fauna. Our findings further prove the need to control cats and foxes to protect vulnerable native species”.