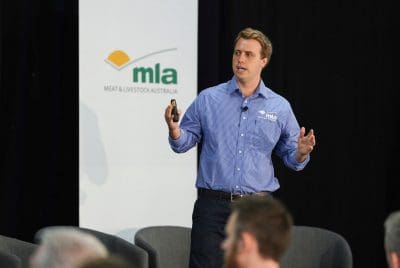 Scott Tolmie speaking in May at Beef 2018. Image: MLA.

For the first five months of 2018, Australian adult cattle slaughter totalled 3.1 million head – an increase of 11pc, or 300,000 head, from the same period last year, although 7pc below the five-year average.

MLA Market Intelligence Manager, Scott Tolmie, said females have largely driven the year-on-year increase, with a 21pc rise in the number of cows and heifers processed, and a modest 2pc lift in male cattle slaughter.

“Persistent dry conditions have seen the average national adult carcase weight forecast for the 2018 calendar year revised downwards, to 292kg/head. However, the upwards revision to slaughter more than outweighs the expected drop in carcase weights, with beef production for 2018 now forecast to increase 7pc to 2.3 million tonnes carcase weight (cwt).”

Mr Tolmie said while slaughter levels are expected to remain elevated and a modest contraction in the national herd is forecast, the inundation of supply, and subsequent price reaction which the industry experienced in 2013-2015 is not anticipated to repeat itself.

“The weight of supply placed some pressure on prices throughout autumn, particularly for young cattle. However, falls could have been much more pronounced if not for strong growth in some key Asian export markets,” Mr Tolmie said.

“Demand in these markets has held firm in the face of increased product coming from both Australia and the United States. The flow-on for producers domestically has been continued price-support for finished cattle, cows and feeder suitable cattle.

Mr Tolmie said seasonal conditions during spring will obviously play a critical role in how the cattle market tracks, with any improvement to pasture conditions likely to see demand for young cattle and females increase.

Live cattle exports have also increased over the past six months, lifting 23pc year-on-year to 487,000 head, led by increased throughput out of Darwin.