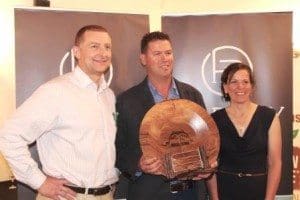 Producers were required to enter a team of three owner-bred feeder animals (two steers and a heifer), which attracted  59 teams representing more than 20 breeds and their crosses.

The entries went onto feed at Willyung feedlot, near Albany in January, fed for 77 days before being processed and MSA graded at Harvey Beef.  No implants were used.

Animals receive points for feedlot performance, processor and MSA compliance and saleable meat yield. However, less weighting is placed on points for the MSA grading section because currently in the WA domestic supply chain, animals with a higher MSA grading do not receive a financial advantage over those with a lower MSA grading.

His team averaged 2.04kg/day gain at the feedlot, with the heifer gaining 2.22kg/day, significantly above average heifer daily gain of 1.53kg/day. The team went on to rank fourth in the processor section. Although the team scored lower on MSA eating quality this was not enough to outweigh their outstanding performance in the other sections.

Runner-up to the overall prize, sponsored by Landmark, was RF Pugh and Co, Mount Barker, who took home $2000 with their team of Gelbvieh composites sired by Summit Gelbvieh bulls. The team had an average daily gain of 1.94kg and total gain of 149kg in the feedlot – well above the average team ADG and total gain of 1.52kg and 117kg respectively.

The team also ranked in the top 15pc in the processor section where they picked up points for meeting the processor specifications and saleable meat yield.

The individual steer with most points overall was entered by Hillcrest Farms, Albany, with an Angus steer sired by Lawsons Angus bulls. The steer had an average daily gain of 2.43kg ion the feedlot, resulting in a total gain of 187kg (average total gain for steers was 117kg) over the 77 days on feed. He also gained maximum points for processor specifications, and was in the top 15pc of all the steers for MSA grading with an MSA index of 65.45.

The individual steer with the best feedlot performance award went to Alan and Sharon Penfold, Capel, with a Salers x Murray Grey sired by Southern End Murray Grey bulls. This steer put on 139kg over the 77 days on feed with an average daily gain of 1.81kg and dressed out at 56pc, resulting in a feedlot profitability of $153.

The individual heifer with the best feedlot performance went to a Charolais x Sussex heifer from Willyung Farms, Albany. This heifer had a feedlot profitability of $275, and gained a total of 133kg over the 77 days on feed with an average daily gain of 1.73kg and dressing percentage of 58pc.

The team with the best MSA grading performance, sponsored by Zambonetti Transport, went to WA College of Agriculture – Narrogin with their Angus team sired by Collegian Angus bulls from the College’s own stud. The team scored an average MSA index of 65.10 (competition team average MSA index 62.77), with a team average for ossification of 113, marbling of 393, P8 fat of 10 and rib fat of 9.7.

Individual heifer with best MSA grading, sponsored by Zoetis, went to Wilhelmdenke Enterprises, Manjimup, with their Red Angus heifer sired by Wyndarra Red Angus bulls. The heifer had an MSA index of 64.60 (average of all heifers 61.39), with an ossification of 110, MSA marbling score of 360, P8 fat of 9 and rib fat of 6.

Individual steer with best MSA grading, sponsored by RSM Bird Cameron, went to Bevan and Rebecca Ravenhill, Young Siding, with their Angus steer sired by Lawson Angus bulls. The steer has an MSA index of 69.19, (average of all steers 63.48) with an ossification of 100, MSA marbling score of 620, P8 fat of 6 and rib fat of 6.

The ‘Young Guns’ prize is awarded to the highest place team entered by a school or college and was created to encourage schools and colleges to get involved in the challenge. This year Mount Barker Community College took home the $200 prize with their team of Murray Grey x Gelbvieh feeders sired by Mount Barker Community College Murray Grey and Summit Gelbvieh bulls. The team ranked 9th overall.

A key focus of the challenge is to provide as much feedback as possible to participants about the performance of their cattle through the supply chain. Each participant was presented with a 50 page booklet at the dinner showing photographs of their cattle at the beginning and the end of the competition, an overview of how each animal in their team compared to the average performance in each section of the competition, and how their animals ranked within their groups of 59 heifers and 118 steers.

Full details of how all individual animals and teams faired in each section was also provided.