‘An ideas man, an inspiration and a larrikin’: Beef industry mourns Ashley Adams 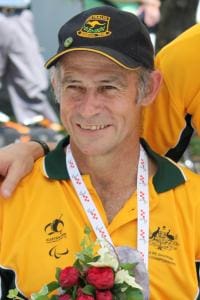 A respected cattle producer from Queensland’s central west with a high record of achievement as a Paralympic rifle shooter and as a beef industry innovator has been hailed as an inspiration to all following his death in a motorbike accident yesterday.

Mr Adams was paralysed in a motorbike race in Blackall in 1982 when he was 26.

He made changes to infrastructure on his 64,000 acre property to enable him to continue to produce cattle, including installing gates that open both ways, and also focused his energies on the sport of rifle shooting, which his grandfather introduced him to as a boy.

He went on to represent Australia in rifle shooting at the Atlanta, Sydney, Athens, Beijing and London Paralympic Games.

He was dual-medallist at Athens in 2004 and won the 2014 IPC World Championship in Suhl, Germany.

He was due to lead Australia’s Paralympic shooting team at the Rio Paralympic Games in 2016.

In 2008 Mr Adams was recognised for his pioneering work focused on breeding cattle genetically pre-diposed to producing tender beef, by being named as that year’s Rabobank Queensland Beef Producer of the Year.

Mr Adams was one of the first producers to use GeneStar tenderness marker testing to selectively breed cattle with a five-star or higher tenderness test rating, which he sold under his own TendaBEEF brand.

Shooting Australia said the nation had lost a great rifle athlete who will be remembered for his his larrikin personality and his great enthusiasm for adjusting and testing his firearms.

He was ‘an ideas man’, someone who tried to get the best out of himself and others.

An emotional head coach Miro Sipek, said, “Ashley was a leader for the rest of the team. Now, I know, we will be doing it for him.”

“No one slept last night, everyone is just shattered. Ashley was meant to lead the team to Rio in 2016, now, they’ll do it for him instead.”

“We are absolutely devastated. Our deepest condolences are with Ashley’s family and friends, as well as the many people within the shooting community who were touched by Ashley’s talent, warmth, wit and humour,” Mr Tasker said.

“As a Paralympic shooter, Ashley was one of our finest ever. In fact, it is hard to imagine an Australian Paralympic shooting team without him, such is the impact he has had on our team and the sport over a long period of time.”

“Our hearts go out to Ashley’s family, friends and loved ones at this tragic time. The sporting world and shooting community is a poorer place today with Ash no longer with us. He was a great athlete and a champion bloke and we will miss him,” Mr Marangon said.

Queensland Minister for Sport and Agriculture Bill Byrne said Mr Adams was an inspirational athlete with a great passion for his sport, shared equally by the love of his land in central west Queensland, where he honed his skills.

“Mr Adams was associated with the Queensland Academy of Sport since 1996 and represented Australia at the Atlanta, Sydney, Athens, Beijing and London Paralympic Games,” Mr Byrne said.

“He was an integral part of the Australian Paralympic shooting team and had been preparing for the Rio 2016 Paralympic Games.”

“On behalf of the QAS, our thoughts are with Ashley’s family, friends and colleagues at Shooting Australia,” Mr King said.

“Always a leader, Ashley will be missed by his fellow athletes, particularly as he was set to lead the team in Rio next year at the 2016 Paralympic Games after securing one of two quota spots for the Australian Shooting team.

Mr Adams is survived by his son Ian.