All aboard call for Oakey’s first cattle train

THE first western livestock rail freight service in 23 years to the Oakey Beef Export plant near Toowoomba has been booked, and will roll out of the western Queensland rail-head of Quilpie on Tuesday, 29 November.

Oakey livestock manager Kurt Wockner said the plant was now taking livestock bookings for the inaugural service, expected to deliver about 880 head of cattle direct to the plant’s new rail siding from the state’s far west. 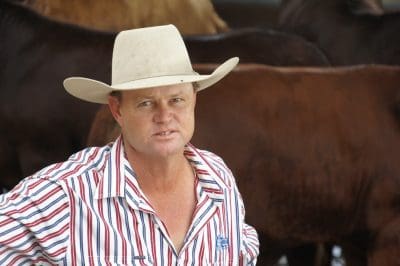 Mr Wockner said bookings did not necessarily have to be large lots, with mobs down to single deck loads welcomed for those wishing to participate.

The inaugural 800km rail service will carry the equivalent of 44 decks, totalling about 850-900 head, depending on size and weight.

In April, the Queensland Government announced $2.5 million in funding for an upgrade to rail sidings throughout western Queensland, including reopening part of an old disused branch line to support the expansion of the Oakey Beef Exports plant near Toowoomba.

The result represents a big win for NH Foods, the owners of Oakey Beef, which has been lobbying for support for the rail infrastructure improvements for the past three years.

The project will help re-establish rail cattle movements from southwestern regions of Queensland to Oakey, which will be critical to allow the plant to undertake a $60 million expansion expected to ultimately double its output.

The upgrading of rail infrastructure will allow Oakey to efficiently move cattle by rail to the site from the big western Queensland cattle centres of Quilpie, Charleville, Morven, Roma and Mitchell.

A siding existed years ago beside the plant, but it was de-commissioned in 1993 through lack of use, because Oakey at that time was much smaller, and focussed primarily on processing grainfed cattle from NH Foods’ nearby Whyalla feedlot, the largest in Australia.

Today the Oakey plant has capacity of around 1200 head per day, both grass and grainfed, and accounted for close to 300,000 cattle during the very busy 2015 year.

Re-opening the old branch line involved removing old track and completing earthworks, before construction of 1.3km of upgraded track, laying more than 1900 sleepers and about 2300 tonnes of ballast. A separate project likely to be completed next year, involves lowering tunnel floors to allow the clearance of 9’6” high freight shipping containers, which are increasingly used to trans-ship goods, via the Toowoomba range line, to the Port of Brisbane.

Oakey Beef visited far western Queensland producers a few months ago to familiarise them with the new rail service, and keep them abreast of the project’s progress. A strong roll-up of 35 producers from across the far west turned up for a gathering at Birdsville.

“We’re committed to growing our business through efficiencies such as the rail service, with help from service provider Aurizon, and the Queensland Government,” Oakey general manager Pat Gleeson told the meeting.

“We have already started planning the next stage, which is to build a terminal to load chilled and frozen containers of product to go directly to Port of Brisbane by rail,” he said.

“We also see this as another opportunity to reduce costs in the agricultural supply chain for those wishing to use the service, with the benefits hopefully getting back to the growers as well.”

Anecdotally, it appears that the rail service could save far western Queensland cattle vendors around 20c/kg to get their slaughter cattle to the Darling Downs abattoir, with freight subsidy attached.

The first train will leave Quilpie on Tuesday 29 November, unloading at the siding located adjacent to the Oakey plant’s holding yards the following morning.

Conditions are now starting to dry out in Queensland’s channel country areas after earlier rain, with some larger flows of western cattle reported in yesterday’s weekly kill report by Queensland processors over the past couple of weeks.