The port town of Wyndham below the Bastion Range in northern WA. Picture: Kimberley Port Authority.

BARELY a trace of what was once the largest meatworks in the Southern Hemisphere remains at Wyndham today.

But the location of its various buildings can still be traced from the Five Rivers Lookout above, perched atop the Bastion Range which towers over the far northern WA port town.

The WA Government built meatworks initially supplied meat to Perth and to the WA gold fields and for export to the UK, employing between 1600 and 2000 workers during each May to September season. 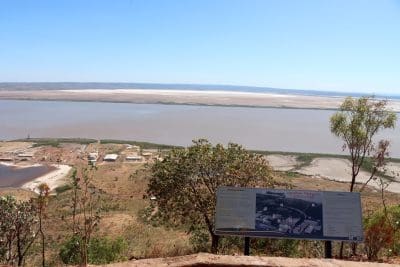 The site of the former Wyndham meatworks viewed from the Five Rivers Lookout above. Sign pictured in more detail below. 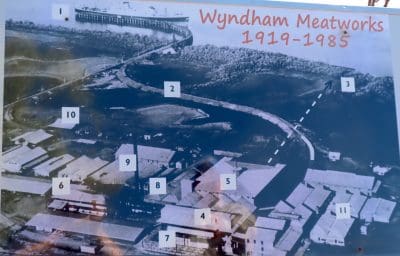 More rich layers of history on the abattoir and the broader northern cattle industry can be found in the carefully tended Wyndham historical society museum, located in the town’s old courthouse on the drive out to the port. 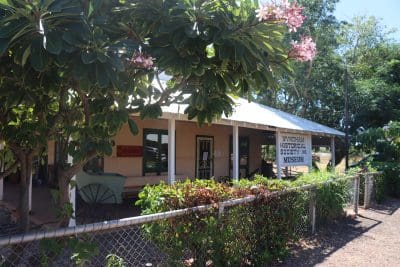 One of the fascinating slices of pioneering history the museum documents is that of the “Air Beef” scheme which operated in the Kimberley from the late 1940s through to the early 1960s, and which gave new meaning to the term “flying cattle class”. 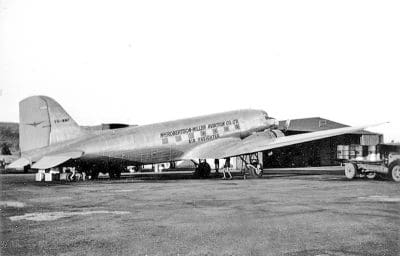 The Air Beef scheme was largely the creation of two men, Kimberley cattle producer Gordon Blythe and Australian National Airways (ANA) Planning and Development Manager, Ian “Grab” Grabowsky, who had both seen how air transport had been used before and during WW2 to supply isolated communities in Papua New Guinea with all manner of goods and cargo.

For Mr Blythe, the improving standard of air transport offered a compelling solution to a perennial problem for Kimberley cattle producers such as himself. Approximate location of Glenroy Station abattoir between Derby and Wyndham

Cattle had to be walked hundreds of miles from stations to abattoirs in distant towns such as Wyndham, involving arduous journeys of several weeks across rocky ranges and sandy tracks, with the loss of weight and animals along the way.

If planes could be used to fly food and supplies into the mountains of the PNG highlands, why couldn’t Kimberley stations build their own small abattoir and then use aircraft to fly meat quickly and efficiently to abattoirs many miles away for further processing and export?

Mr Blythe conducted an early trial in 1946 with air transport company MacRobertson-Miller Aviation Co Ltd (MMA), accompanying four unchilled beef carcases on a Lockheed 10A Electra for a 10-hour, 2000 mile (3200km) flight from Mount House station to Perth, with one refuelling stop on the way.

The beef reportedly arrived in “perfect condition” and was donated to the Red Cross, raising £50 at auction.

With proof it could be done, Air Beef Pty Ltd was formed in 1948 with a £15,000 investment from a consortium including the airlines ANA and MMA and a group of WA pastoralists led by Mr Blythe.

The WA Government chipped in with a three-year interest-free loan of £10,000 per annum and a subsidy of 1d per lb of meat transported by air in the region during the first year.

Construction of a small abattoir at Glenroy station to slaughter cattle and quarter and chill the carcases was completed in May 1949 at a cost of £30,000. An air strip upgrade on the hard red ground was completed for just £100. 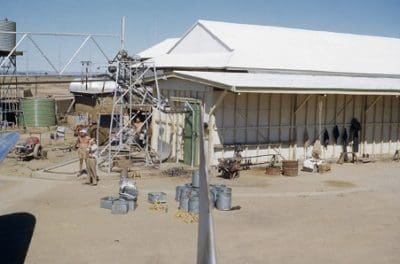 View from the aircraft of the abattoir at Glenroy with the chiller in the nearest building. Glenroy abattoir mages: Airways Museum.

Air Beef operations officially began on May 13, 1949, with a MMA DC-3 operating from Glenroy to Wyndham, where the quartered carcases were frozen and packed at the Government abattoir.

To achieve maximum weight reduction on the DC-3 aircraft, auxiliary fuel tanks were taken out as regular tanks carried more than enough petrol for the 75 minute flight. De-icing panels were also removed from the fuselage, as there was no risk of icing, and the automatic pilot was dispensed with, along with the cockpit sound-proofing. The journey was noisy, but “bearable if ear plugs were used”, according to one account.

Consequently the Air Beef version became the lightest DC-3 in the world, weighing just 6852kg instead of the normal 7355kg, which meant it could carry 4540kg of beef, instead of the previous 4080kg. 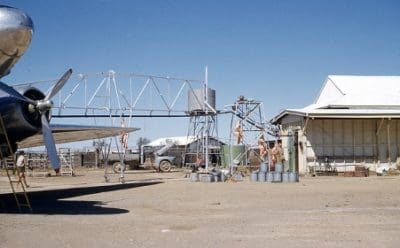 Carcases were moved from the chiller via a gantry to the parked aircraft. Carcasses were chilled at Glenroy prior to transport, but the aircraft was not refrigerated, the air temperature on the flight to Wyndham being low enough to keep the meat fresh.

The Air Beef system accepted cattle from various stations in the region (including Bedford Downs, Fossil Downs, Gibb River, Mount Hart, Mount House, Karunjie, Lansdowne, Spring Vale and Tableland among others), which were slaughtered at the abattoir at Glenroy, where the meat was graded according to its quality and chilled before being flown up to Wyndham. The producers would be paid according to weight and grade on the entire carcase.

By the end of the 1949 season the DC-3s had transported some 1,776 carcasses from Glenroy to Wyndham, with Air Beef Ltd reportedly “just about covering its expenses” in year one. 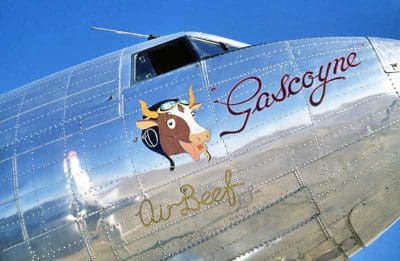 MMA Douglas DC-3 VH-MML Gascoyne shows off the Air Beef logo. Each of the MMA aircraft was given the name of a region of Western Australia.

One immediate result of the scheme was the upgrading of meat going to the abattoir, as cattle did not have to endure the arduous trek to Wyndham.

Station owners were also able to take advantage of the opportunity to backload DC-3s returning to Glenroy with food, machinery, salt for hides, fencing wire, corrugated iron and other vital supplies which would have otherwise taken days or weeks to arrive, or not at all during the wet season months, while also being delivered at lower cost the station owners and in better condition with less travel damage.

Valuable stud animals could also be transported efficiently and expediently via back loads to stations. Flights operated during the dry season from May to August.

A snap freeze unit was installed at Glenroy in 1956 to supply demand from Europe, Singapore and the Australian domestic market for pre-packed, snap frozen beef.  Accounts suggest the beef was able to be delivered in excellent condition to those markets and at prices for consumers cheaper than the ‘local’ product.

In 1959 a new abattoir opened at Derby, a deep water port closer to Glenroy, and all Air Beef operations switched from Wyndham to Derby.

The ambitious scheme operated successfully for 13 years, carrying beef from 55,529 cattle along with offal and hides, and backloading some 3870 tonnes of cargo from Wyndham and Derby to Glenroy and en-route cattle stations.

End of the Runway

Despite it’s success for more than a decade, Air Beef operations ceased operations after the end of the 1962 season.

By that year the Kimberley inland road network had been improved to the extent that it was now more economic to move live cattle by trucks to the coastal meatworks.

The Glenroy abattoir closed in 1964 and was virtually destroyed by fire in 1966.

In 2006 the ruins of the Air Beef abattoir at Glenroy Station were recognised by the Western Australian Government for their historical significance, and the abattoir and aerodrome were listed on the State’s Heritage Register.

WA Heritage Minister Francis Logan said the abattoir had played an important role in the development of the beef pastoral industry in the Kimberley and the North-West during the 20th Century.

The actual construction of the abattoir and aerodrome was also very innovative in such difficult climatic and logistical conditions, he said, as most of the materials had to be transported to the site by air.

A more comprehensive history of the Air Beef scheme, including a colourful first-hand account from an Air Beef pilot, can be read in a 2015 article by Nick Stroud, editor of The Aviation Historian, via a PDF download from this link.

The Wyndham Meatworks itself was constructed by the WA Government and opened in 1919. In the 1960s it changed hands to private ownership and ran under several owners until 1985, pausing operations for only a few years from 1942-45 during WWII. 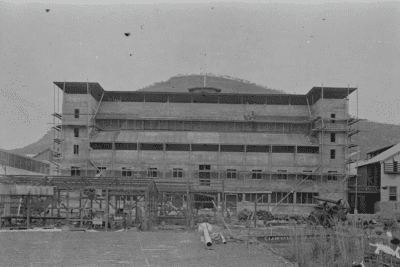 It initially supplied meat to Perth and to the WA gold fields and for export to UK, and for a time was the biggest meatworks in the Southern Hemisphere, employing between 1600 and 2000 workers during each May to September season. 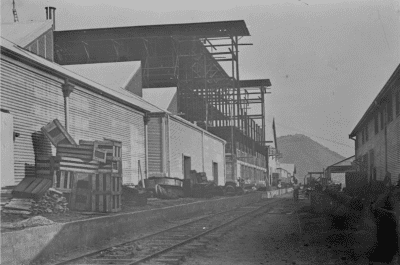 In addition to the beef delivered via the Air Beef scheme, stock were mainly walked into the meatworks from cattle stations via a range of stock routes, while carcases were placed in stocking net bags sewn on site and transported to the nearby Wyndham wharf on tramways via small kerosene-fuelled trains. The remains of locomotives used on the tramway that transported meat from the plant to the wharf at Wyndham.

In total more than two million cattle were processed at Wyndham over 62 seasons. 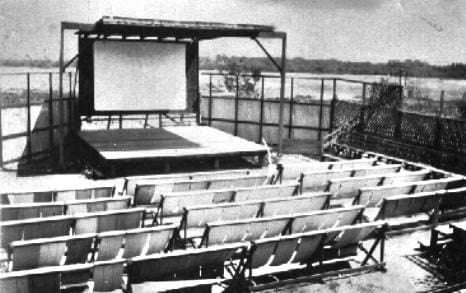 The ‘overflow’ pipe draining the slaughter floor crossed the mudflats to the gulf through a 10’ (foot) clay pipeline, known as the “blood drain”, where at the shores edge awaited “an assortment of small and large fish and crocodiles”.

It was a remote life, but one with “a strong sense of community”, Walkley-award winning journalist Keith Willey wrote about Wyndham in a 1962 newspaper article.

“If a mate is down on his luck you help him and you don’t count the cost.

“Over there in the meatworks when a man was killed on the job, everyone in the building contributed a day’s pay to the widow – a total of 1500 pounds.

“Mateship is not yet a dead word in Wyndham.”