WOOLWORTHS has posted an after-tax loss of $972.7 million in its half-year results announced this morning, hit hard by its dismal investment in the Masters home hardware division, but also held back by lower sales and earnings in the core supermarket retail division.

The financial result represents the grocery giant’s first loss since it was listed on the Australian stock exchange 23 years ago.

In the six months to January 3, Woolworths said first-half results slumped 176 percent from the $1.28 billion profit the supermarket giant posted in the previous corresponding period.

Woolworths said impairment charges and costs to exit its Masters Home Improvement arm would total $1.89 billion. Losses at Masters increased by 22.9pc to $137.9 million, on the back of costly store openings and mixed gross margins.

“We are rebuilding the Woolworths business,” chairman Gordon Cairns said in a statement released to the Australian Securities Exchange.

“While we have made progress, it will be a three to five year journey and there is much to do. The decision to exit home improvement will allow Woolworths to focus its energy and resources on strengthening and executing its plans in its core businesses.”

Last month, Woolworths announced it would exit its disastrous Masters business, by selling or winding up the stores, after buying out its US partner, Lowe’s. 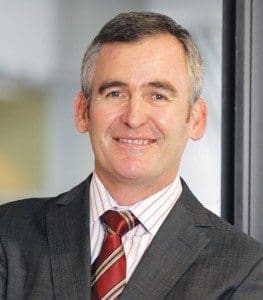 Woolworths has also appointed a new chief executive to replace departing Grant O’Brien. The new CEO is the current managing director of the organisation’s Food Group, Brad Banducci, who Mr Cairns described during an investor briefing as an “outstanding candidate in the field.”

Mr Banducci is understood to have been the only internal applicant for the role. Most analysts had anticipated the appointment of an external candidate, who could bring a change of culture to the organisation and reinvigorate its supermarket business.

Woolworths’ underlying net profit fell by 33pc in the half-year to $926m before write-downs, which was in line with the company’s previous forecasts of $900m to $1 billion.

Comparable sales in Woolworths’s food and liquor divisions fell by 0.8pc to $22.3 billion in the six month period, as the retailer reduced grocery prices to try to win back shoppers from rivals Coles and Aldi.

The supermarket division reported a decrease in pre-tax earnings of 31.7pc on the prior year, reflecting subdued sales growth driven primarily by deflation from “significant investment in better prices for customers.”

Sales momentum in the supermarket division improved slightly during the second quarter, with December being the best trading month for the half-year.

“However, trading remains volatile and there remains a lot more to do,” incoming CEO Brad Banducci said. He said Woolworths was going through a period of significant change.

“This result reflects the impact of those changes, most notably the considerable investment in price, service and customer experience across Australian Supermarkets. The reported earnings result is also heavily impacted by the decision taken to exit the Home Improvement business and the subsequent provision for the impairment of assets, lease liabilities and other exit costs,” he said.

“Looking forward, we expect trading conditions to remain competitive as we continue on the journey of rebuilding Woolworths,” Mr Banducci said.

Shares in Woolworths slumped by 6pc on the news, touching nine-year lows before clawing back some losses to fall 2.5pc to $21.35.