Wellard Ltd has released its full financial results for the year ended 30 June 2017 to the ASX today, confirming a net loss after tax of $77.3 million.

In its statement the Company said the loss before tax, excluding impairments on vessels, was $61.4m, which was in line with the $55m-$65m range provided by Wellard to the ASX in its earlier announcement to the ASX in July.

Wellard said it finished FY2017 with an improved net cash position of $33.0m, largely due to the capital raise completed by the Company in May 2017.

The anticipated additional non-cash write-down on the sale of the MV Ocean Outback totalled $13.1m as previously disclosed, which formed part of the $19.8m in asset impairments and write-offs set out the preliminary final accounts.

An amount of $17.3m, being the net proceeds from the sale of the $34.9m MV Ocean Outback, was received subsequent to the financial year end.

Key elements of the FY17 results relative to the FY16 results are as follows: 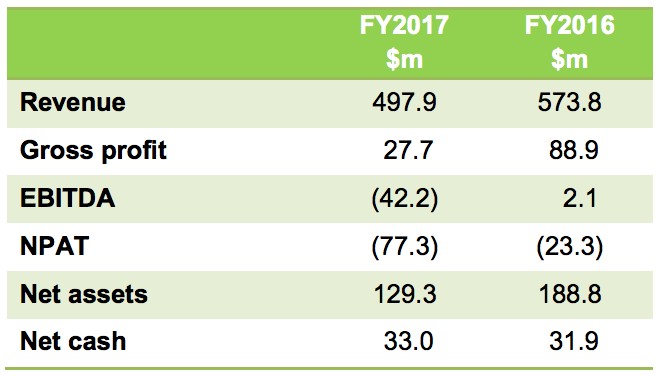 Wellard CEO and Managing Director, Mauro Balzarini, said he and the Wellard management team were extremely disappointed by the financial results:

“Management and staff continued to work hard to manage the impact of historically high Australian cattle prices, which are impacting the Company’s volumes and margins, and therefore financial results,” Mr Balzarini said.

“The number of cattle we shipped for the financial year fell by 29 per cent. In addition, the high purchase price of cattle in Australia combined with price resistance in South East Asian markets reduced our margins.

These market conditions led the Company to accelerate expansion in the South America market. Whilst utilising excess shipping capacity, dealing with new suppliers and less familiar customers produced variable results. The Company is re-shaping its operations in this region to address these challenges.

It has also been actively managing its costs, its fleet utilisation and its cashflow.

“In response to market conditions we have commenced a cost out program, limited capital expenditure, reduced our head count, reinvigorated our sales effort and reviewed the size of our shipping fleet,” Mr Balzarini said.

“We sold the MV Ocean Outback in July 2017 and deferred the delivery date of the MV Ocean Kelpie until 30 November 2019, including the majority of related financial commitments, which have been pushed back by 12 months. These initiatives will improve the utilisation of the Company’s remaining shipping assets and have improved our balance sheet with extra cash from the sale. We have also contracted out ships for external charters when this was more profitable than exporting and shipping.”

Net debt was reduced by approximately $8.1m as at 30 June 2017 and was further reduced by $15.6m post-balance date due to the retirement of debt owed on the MV Ocean Outback.

required Wellard to categorise all long-term debt as a current liability, regardless of its tenure.

Loans and borrowings of $138.0m would have otherwise been classified as non-current liabilities as they are due to mature beyond 12 months from balance date. As in the past, the Company has either received or expects to receive waivers for all covenant breaches that occurred on or up to 30 June 2017. The Group made all payments due under its working capital facility and ship financing facilities during the period.

Wellard has maintained a strong focus on animal welfare throughout the year without any major events recorded. Our purpose-built ships, dedicated animal welfare officers and an ongoing R&D program ensured that our success rates continued to be higher than industry averages.

The Company said its performance is sensitive to Australian cattle prices and foreign exchange rates. Pricing for some categories such as heavy slaughter cattle suited for Vietnam have eased. Prices for other categories remain at or close to historical highs, notably the lighter steers that are exported to Indonesia, Wellard’s largest market.

“We are beginning to see increased interest for shipping capacity to China and the Middle East and have recently signed a number of external charters to third parties. The recent fall in prices for heavy cattle is also increasing the viability of shipments to markets such as Vietnam,” Mr Balzarini said.

“Whilst conditions remain subdued this is helping to improve our financial performance in the first few months of the new financial year, but until we see if price reductions are sustained through the upcoming wet season and into 2018, it remains unclear what impact that will have on Wellard’s overall FY2018 results.

opportunity for the business when delivered Australian cattle prices reach a level that is competitive against the Chinese domestic supply.

“In the meantime, we continue to actively manage the business through the current challenging trading conditions so that we can leverage the benefits of our strategic assets when the spread between our purchase price and selling price normalises.”

The statement said the Company remained the largest exporter of cattle from Australia, with market leading positions in Indonesia and Vietnam. It has reduced overheads by 21%, has an improved cash position, and owns and operates one of the largest and the most modern livestock transport fleet in the world.