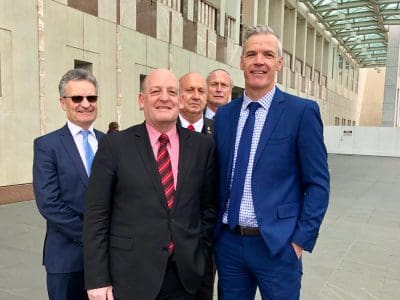 The groups have committed to work together to provide “a powerful, united front to the halls of Canberra”.

“The on-farm and corporate aspects of agriculture have a mutual interest in many of the policy areas that are a priority to the NFF,” Mr Mahar said.

“By working together with Australia’s preeminent agribusiness advocacy group, we will present a powerful, united front to the halls of Canberra and ultimately accelerate agriculture to realise its potential.”

“Farmers and agribusinesses are co-dependents in the agriculture supply chain, and a closer working relationship and a more in-depth understanding of each others’ perspectives, can only be positive.”

“Ultimately, today’s partnership is all about a more productive and profitable agricultural sector, where farmers, agribusinesses and the community benefit,” Mr Allison said.