AFTER a sustained fall in many commodity prices at the end of 2016, a massive jump in lamb prices as well as higher prices for beef and sugar pushed the NAB monthly Rural Commodities Index 1.4 percent higher in A$ terms in January.

The 2017 outlook for Australian agriculture has been boosted by forecasts for moderately higher prices for a number of commodities in the February Rural Commodities Wrap from NAB Agribusiness. However, the outlook is highly dependent on the course of the Australian dollar.

This week, NAB revised up it’s A$ currency forecasts for the first half of 2017, although the bank still expects the A$ to fall to US70c by the end of 2017.

The bank’s forecast is for beef prices to contract during 2017, with major export markets showing a generally subdued price outlook and re-stocker interest under threat if dry conditions persist.

NAB is expecting the Eastern Young Cattle Indicator to fall to 500c/kg by September this year, which would be a 30pc contraction from the peak in August 2016, but still above the range of prices prior to 2015. 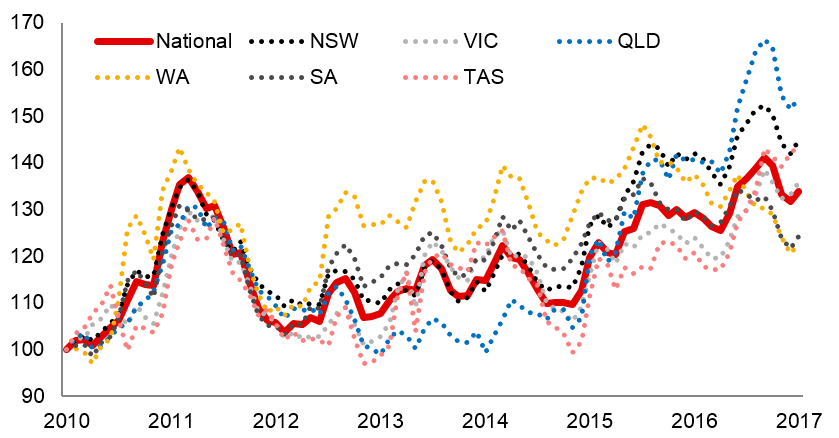 The NAB Rural Commodities index has expanded to include separate state indices (pictured), and the lender’s February Rural Commodities Wrap shows Queensland has been the strongest performing state since late 2015.

NAB agribusiness economist Phin Ziebell says this is a reflection of the state’s huge share of Australia’s cattle industry and the extraordinary run of saleyard prices last year.

“Although beef prices have fallen, Queensland continues to outperform other states. Grain-heavy Western Australia outperformed other states from 2012 to 2015, but poor grain prices saw it sink considerably by the end of 2016,” he said.

NAB has revised its interest rate outlook and now expects one 25bp cut to the cash rate in November 2017, taking it down to 1.25pc.