How the ASX’s beef cattle stocks fared in 2017 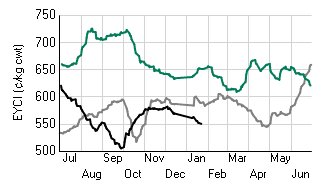 2017 wasn’t a bad year for cattle prices – for those with cattle to sell at least.

A late season rally helped by rain in parts of Queensland and NSW saw the Eastern Young Cattle Indicator recover some of the ground lost earlier, to close the year at an average price 601.22c/kg cwt, 100c/kg above 2012-17 five-year average 0f 482.56c.

So how did the stock prices of those big four fare in 2017? 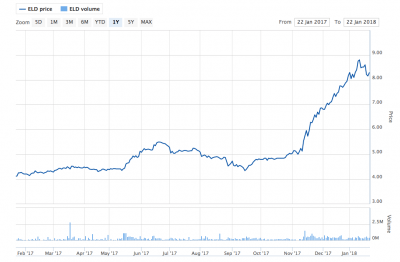 The star performer was Elders, which has completed a remarkable turnaround following its woes of only a few years ago when the iconic 178 year old stock and station agency business was burdened with large debts, big losses and a highly uncertain future.

Like Ruralco, Elders is diversified with services in ag chemicals, fertilisers, grain trading, insurance etc, but has broad exposure to the beef cattle industry through its agency business and branch network.

In early December Elders was able to pay its first dividend in nine years after it posted a net profit after tax of $116 million, more than double the previous year.

The exceptional result followed a successful restructure and implementation of a strategic Eight Point Plan to reduce debt and turn the company back into a pure play rural business. 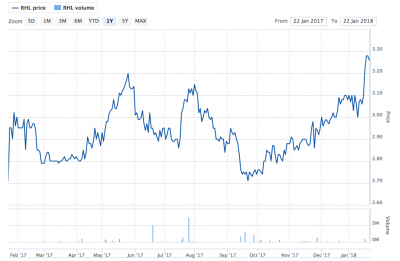 It was also a positive year for Ruralco Holdings, which announced record second half and full year earnings for the 12 months to September 30, 2017, headlined by a 95 percent rise in net profit after tax to $26.2 million.

In his chairman’s address Rick Lee said solid seasonal conditions in the eastern states, bolstered by above average commodity prices for most of the year, had helped drive the strong result.

Ruralco announced a 50pc increase in the size of its dividend to 15c per share on the strength of the outcome. 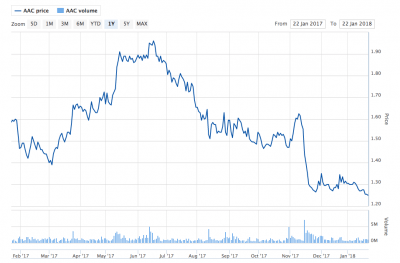 Shares in AA Co had climbed to 196c in June before easing and then falling sharply in November following the release of half-year results for April to September showing a loss of $37.7 million, compared with earnings of $47.9m for the corresponding period the year before.

The half-year result followed a run of profits for AA Co for the last three financial years.

From 162c on November 9, AA Co’s stock trended sharply lower following the announcement to 140c, and finished the year at 130.5c.

The weaker result was put down in part to a one-off impact from a $52.6 million downgrade in the value of the company’s cattle herd, reflecting the 22pc drop in the EYCI during the half-year period.

Chairman Donald McGauchie said at the half-year announcement in November that AA Co had come a long way from being a cattle company to a branded beef business. “Tough – but highly considered– decisions were made as we have executed on the strategy. Today’s results demonstrate the progress that has been made and the work still being done. Most importantly the team is consolidating the strategy and ensuring excellence in its execution.”

AA Co has not paid a dividend to shareholders since 2008. 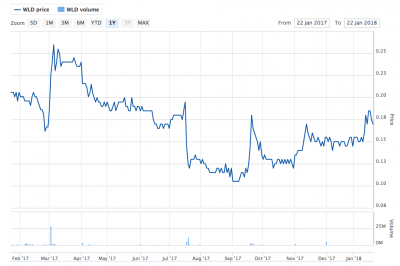 Shares in Australia’s largest livestock exporting company Wellard Limited closed 2017 about 25pc lower than they started, and still a long way south of the $1.39 price at which Wellard opened upon listing on the ASX in December 2015.

Wellard shares did climb as high as 26c in March 2017 upon news that large cattle producer and long time supplier Heytesbury Pastoral Company had purchased 9pc of Wellard’s shares. Heytesbury bought the shares sold by Tariq Butt after the Pakistani meat trader had earlier tried, unsuccessfully, to have his own candidate elected to the Wellard board.

High Australian cattle prices and demand challenges in the key markets of Indonesia and Vietnam have made life difficult for Wellard since its ASX debut, with the company forced to announce several profit downgrades and big financial losses since that time. The company sees China as a major market opportunity but delays in the opening of that trade, impacted by the continued high price of Australian cattle, have not helped its cause to date.

In the meantime Wellard’s fleet of large export vessels has been deployed to longer haul runs, primarily carting cattle from South America to markets in the Middle East and Europe.

In the wake of a F7 2017 statutory loss of $75.3 million announced in November 2017, Wellard chair David Griffith said the same conditions which severely compressed margins in FY 2017 were likely to persist into FY2018. He said the Company was continuing with its response which had so far included significant restructuring, personnel changes(including bringing Fred Troncone back into the company as executive director of operations), a rigorous ‘costs out’ program, asset sales, capital expenditure deferments, market diversification and a capital raising.

Four slaughter cattle shipments from Australia to China in the past three months and an easing in cattle prices since the start of January have created a brighter outlook for cattle exporters geared to supplying the market. This may explain the 25pc increase in Wellard shares to 18,5c last Friday (today 17c) that has occurred in the past two weeks (as shown in the chart above right).

Mr Griffith said in late November last year Wellard was encouraged by a level of enquiry that may lead to further shipments to China this Financial Year. “We believe that structured properly, the China market represents a massive opportunity for our business, and we are increasingly confident that our first pilot shipment will be recognised as the proof-of-concept that started something much bigger”.