Elders has turned corner in 2014: Ranck 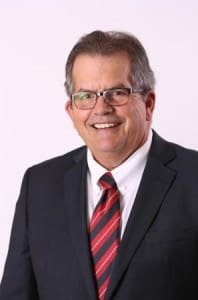 2014 has been the year that Elders has ”turned the corner”, according to the rural service company’s chairman Hutch Rank.

In a report to shareholders at the 175 year old company’s Annual General Meeting in Adelaide this morning, Mr Ranck said Elders had achieved a $77.3 million improvement in underlying profit, and, for the first time in six years, had recorded a profit at both a statutory and underlying level of $3 million and $8.8 million respectively.

Mr Ranck said the company also made significant inroads into reducing debt in 2014.

At the commencement of the global financial crisis, Elders’ debt was in excess of $1 billion.

Refinancing with ANZ, NAB and Rabobank, and the sale of investments in New Zealand  (Elders New Zealand and JS Brooksbank) and in Australia (Elders Insurance, Kilcoy Pastoral, Australian Fine China and AWH Pty Ltd) had helped to reduce Elders’ debt by the nearly half compared to the same time last year.

Elders’ $57 million equity raising, announced in September this year and completed in October, had provided the company with a sound platform from which to direct capital back into the business and to grow earnings and returns.

Today’s  AGM also passed a resolution to support a 10 to 1 share consolidation process.

Mr Ranck said the share consolidation was required because the large number of Elders shares on issue, which totalled more than 837 million shares following the capital raising process in October, presented a number of disadvantage for the company.

“It is therefore the Board’s belief that a consolidation of shares on a 10 to 1 ratio will assist in eliminating, or mitigating these disadvantages. In particular, having a share price more comparable with its peers will position Elders better in institutional investment circles,” Mr Ranck said.

“All things being equal, the value of your holdings should not change as a result of the consolidation. If, for example, you had 1000 shares at, say, 21.5 cents each before consolidation (a total worth of $215), you should, subject to marketfluctuations, have 100 shares at $2.15 each after consolidation (still a total of $215).”

Since the 2013 AGM, Elders has experienced a major leadership renewal at board level. Two new directors were appointed in April – Ian Wilton and James Jackson – while the past year also saw the appointment of former chair Mark Allison as CEO, and Mr Ranck named as the new chair.

“We now have a board with an agribusiness focus,” Mr Ranck told shareholders at the AGM.

“The appointment of Mr Allison, a seasoned agribusiness executive with corporate strategy experience, as Chief Executive Officer means your Company has the right industry experience, financial management skills and leadership capability to take it into this next exciting phase.”

In the past year the board has reduced the pool for non-executive director remuneration from a limit of $1.8 million to $1.2m, while the CEO’s base salary has been reduced by 30pc and the chairman’s fees by 20pc.

“The new remuneration pool reflects the smaller Board size, but of course we need to balance the need for a smaller pool with the need to remunerate directors for their higher workload and to attract and retain high calibre candidates.

“To this end we elected not to reduce the fees paid to Directors.”

A recent review had shown that Mr Rank’s fee as chairman was at the 50th percentile for companies with similar revenue and number of employees and our non-executive director fees are at the 75th percentile.

Mr Ranck said he was immensely proud of the turnaround Elders had achieved in 2014.

“I am proud of the nearly 2000 employees who don their pink shirts every day, who live and breathe rural life with resilience and passion that is second to none.

“I am proud of our clients, our customers and our shareholders who have stuck with us through what has been a challenging period in our 175 year history.

I am proud that as a company we have worked together to create a strong platform to create value in 2015 and beyond.

“Clearly, there is much work still to be done, but I am confident we have the fundamentals in place to once again become Australia’s leading agribusiness.”

Since taking over as CEO this year, former Elders chair Mark Allison has overseen the development and implementation of a three year strategic plan, known as the “Eight Point Plan”.

Mr Allison said the plan, developed by 40 of Elders’ senior managers, was very ‘Return on Capital (ROC) focused,’ and laid out a practical, back to basics approach to running the Elders business.

The plan sets a target for Elders of achieving $60 million earnings before interest and a 20pc ROC by the 2017 financial year.

Mr Allison said a branch benchmarking review has identified a tail of underperforming branches, and is currently implementing a branch improvement plan.

Under the Eight Point Plan, a number of previously unsustainable branches were now considered sustainable from an EBIT and ROC viewpoint.

Priorities for the 2015 year included: