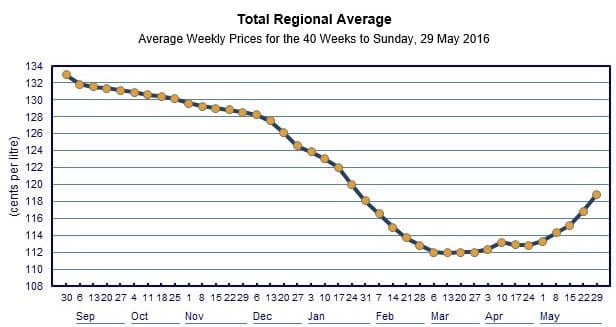 AFTER three months of prices near ten-year lows, diesel fuel is again gaining in value on the back of currency movement and higher than expected demand in some parts of the world.

Analysts have adjusted global fuel oil demand higher for the back half of this year, led by strong gains in India, China and, more surprisingly, Russia. European fuel oil demand grew faster than expected over the past six months, despite a milder than usual northern hemisphere winter.

Supply and demand are expected to again move closer to equilibrium towards the end of 2016.

In the local market, the lower trajectory in the value of the A$ against the greenback is also affecting diesel prices, as Australia is only about 50pc self-sufficient in fuel oil.

After hitting ten-year lows in March when the national average price in rural/regional areas of Australia reached 112c/litre, there’s been a moderate, but sustained increase in pricing since then.

Beef Central’s regular monthly rural diesel fuel price report compiled this morning, based on the latest Australian Institute of Petroleum weekly survey, shows a national average in regional/rural areas of the country of 118.9c/l – up almost 7c since late March. Biggest rises were seen in Queensland, Tasmania and Victoria.

Based on current average diesel prices for regional/rural areas of Australia, filling a Toyota Landcruiser 200 series (138 litres, main and auxiliary tanks) today would cost $164 – still $25 less than the same fill back in July last year, at the peak of the recent market.