Diesel fuel prices remarkably stable during first half of 2017 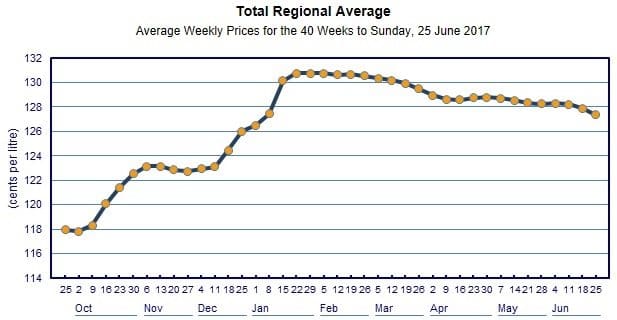 AFTER two or three years of dramatic and often sharp rises and falls, diesel fuel prices across regional parts of Australia have been remarkably stable during the first half of 2017.

Prices have traded in a narrow 4c/litre range since January, between 127-131c/litre.

That contrasts with huge sweeps as low as 112c/l in March last year (a ten year low), to 157c/l a year or so earlier.

A more stable Australian currency and closer alignment between global fuel oil supply and demand are some of the reasons for recent price stability, making it easier for primary producers to budget their fuel costs.

However, with recent tensions in the Arabian Gulf oil producing region, prices could again start to rise heading into 2018, International Energy Agency commentators warn. Immediate concerns about stubbornly high fuel oil stocks due to rising global production are keeping a lid on fuel prices, however.

As our graph above shows, retail diesel prices in regional and rural areas of Australia have hovered around the 128c/litre mark since Beef Central’s last diesel fuel report in March. The most recent weekly report issued by the Australian Institute of Petroleum for the week ended Sunday 25 June logged an average of 127.5c.litre.

Based on current average diesel prices for regional/rural areas of Australia, filling a Toyota Landcruiser 200 series (138 litres, main and auxiliary tanks) today would cost $175.60, only about $6 more than it did this time last year, when the price was around 123c/l.

Biggest price changes within states since our previous March report have been seen in Queensland and NSW.

Worth noting is the fact that this report is only the third time in recent memory that the Northern Territory has not had the highest priced regional fuel in Australia, with Tasmania getting the glory since December.