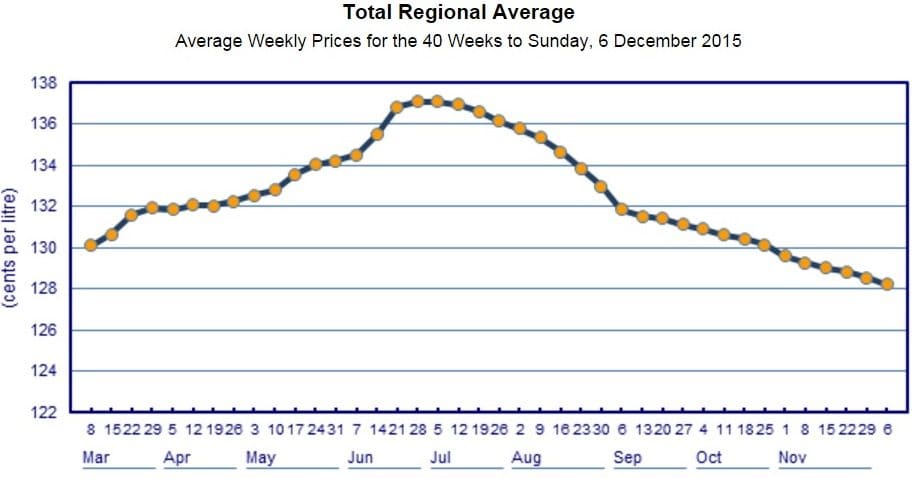 PRESSURED by a growing global surplus of fuel oil and a strong US$, diesel fuel prices have continued to decline over the past month, and look likely to fall further.

The Australian Institute of Petroleum’s weekly price report for the week ended Sunday, December 6 indicates prices for diesel in non-metro regional areas of Australia averaged 128.2c/litre, another 2c/litre drop since our previous report in late October, and back 9c/l since late July.

The graph above shows prices are now approaching their 2015 yearly low of around 126c/l, recorded back in February.

The latest Australian Institute of Petroleum weekly survey shows that based on current average diesel prices for regional/rural areas of Australia, filling a Toyota Landcruiser 200 series (138 litres, main and auxiliary tanks) today would cost $177 – $30 less than the same fill this time last year.

All regions bar the Northern Territory have seen big declines in pump prices since late October, with the biggest drops seen in Queensland, Tasmania and NSW.

Stockpiles of oil at a record 3 billion barrels are providing world energy markets with a degree of comfort. This massive cushion has inflated even as the global oil market adjusts to $50/bbl oil. Demand growth has risen to a five-year high of nearly 2 mb/d, with India galloping to its fastest pace in more than a decade. But gains in demand have been outpaced by vigorous production from OPEC and resilient non-OPEC supply – with Russian output at a post-Soviet record and likely to remain robust in 2016 as well. The net result is brimming crude oil stocks that offer an unprecedented buffer against geopolitical shocks or unexpected supply disruptions.

The stock overhang that first developed in the US on the back of soaring North American crude production, has now spread across the OECD. Since the second quarter, inventories in Asia Oceania have swollen by more than 20 million barrels. In Europe, record high Russian output and rising deliveries from major Middle East exporters are filling the tanks. Crude oil stocks are also piling up in the non-OECD, with China building inventories at a 0.7 mb/d clip during the third quarter and India starting to pour oil into its strategic reserves.