THE nation’s largest agri-lender, NAB, has announced it will allow farmers to offset their Farm Management Deposits against their loans. 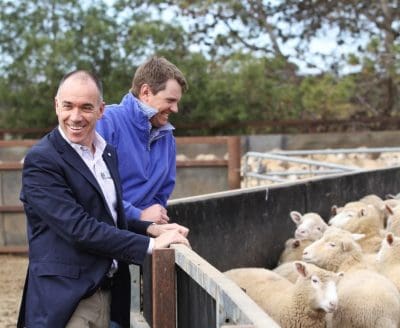 Farm Management Deposits allow farmers to remove money from their taxable income during good years, to later use during tough times.

NAB has also announced it will no longer charge penalty interest payments on farmers who fall into default on their loans.

The move has been applauded by Minister for agriculture David Littleproud, a former agribusiness banker.

Mr Littlproud used his recent Drought Roundtable in Canberra to call on the big banks to allow farmers to use FMDs as offsets against their loans the same as many people use an everyday offset account which offsets interest on their home loan.

Mr Littleproud said only one bank in Australia, Rural Bank, had offered farmers the chance to use their FMD as an offset against their loan despite the Coalition Government changing the law to allow it in 2016, and also doubling the amount a farmer could hold in their FMD to $800,000.

“One in three farmers bank with NAB so this change has the potential to help a lot of families,” Mr Littleproud said.

“This is an investment in agriculture’s future and farmers can now vote with their wallets. I hope other Aussie banks follow NAB’s lead and get on board.

“You have to ask how serious that bank is about agriculture in Australia. It’s fantastic an Aussie owned bank has shown a social conscience and led from the front.

“If you’re a farmer whose bank doesn’t offer an FMD offset, you can tell them to bugger off because there are banks now which do.

“I also congratulate NAB on removing penalty interest when a farmer defaults on a payment during drought. I call for other banks to do the same. But it’s also an opportunity for the banking sector to reassess penalty interest as a whole because

“I don’t think the charge truly reflects the cost to the bank. It’s really a kick in the guts when someone’s down, which isn’t the Australian way. Banks have an opportunity to improve their standing in the community and win back some social licence by reassessing these charges.

“I congratulate NAB boss Andrew Thorburn for acknowledging the banks have had issues in rural Australia and stepping up to lead.”

The move has also won praise from Queensland farming body AgForce with General President Grant Maudsley saying the group had been seeking introduction of offsets for Farm Management Deposits during the Agricultural Competitiveness White Paper process in 2014.

“We very much welcome this week’s announcement from Australia’s largest agri-lender, NAB,” he said.

“Offsetting FMDs against other farm loans will enable producers to save on interest costs while also growing their resilience to business risks, including drought or market downturns.

“NAB’s decision to no longer charge higher default interest rates on drought-affected farmers who are unable to make their loan repayments is also very welcome.

“It is counterproductive and unfair for farmers who are struggling to meet repayments to then be hit by even higher charges, which often contributes to foreclosure actions being taken by the bank.

“We congratulate NAB on the announcements they have made and urge other rural lenders to follow their lead.”

“The banking Royal Commission provides an opportunity to shine a spotlight on the poor practices of the past, while also looking at how the banking sector can work better with farmers to attract more investment and grow their businesses into the future,” he said.