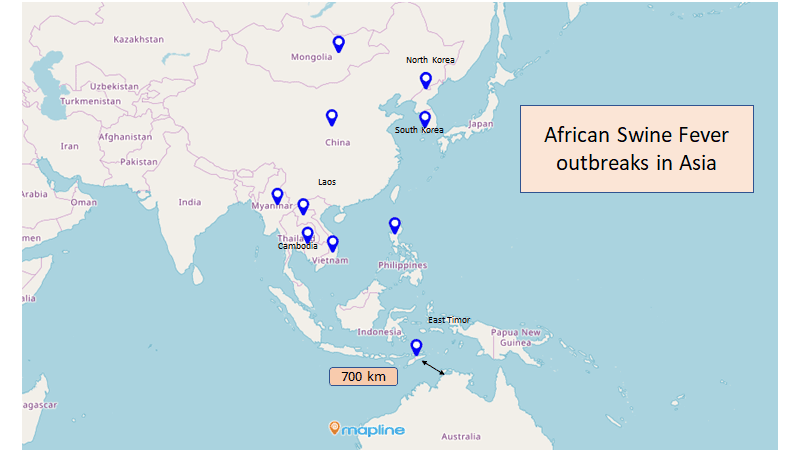 Indonesia has confirmed that it has detected African swine fever in North Sumatra, and is investigating pig deaths in some other provinces.

Minister for Agriculture Bridget McKenzie said the news was concerning, especially as Indonesia—and particularly Bali—was so popular with Australian tourists.

“There are about 188 flights a week from Indonesia direct into Sydney, Melbourne, Brisbane, Cairns, Perth, Adelaide and Darwin,” Minister McKenzie said.

“African swine fever kills about 80 per cent of the pigs it infects, there’s no cure and no vaccine; and it’s not present in Australia.

“Our government has already responded to this global disease threat—to safeguard the 36,000 jobs that rely on our pork industry and to protect Australia’s international trade, built on our reputation for producing safe food and fibre.

“Bali is a favourite holiday destination for Australians and it’s also a region with a lot of pigs.

“Our government foresaw the threat this disease posed and just last week I announced an extra $66.6 million to put 130 more biosecurity officers at our airports to do half a million more passenger screenings and deploy an extra six detector dogs.

“My department has already raised the risk status of flights from Indonesia and is increasing screening, interventions and scrutiny of travellers in line with the procedures we use to manage flights arriving from other ASF affected countries.

“I’d appeal to anyone travelling between Australia and Bali and elsewhere in Indonesia to be extra diligent about declaring what they’re bringing back in—and to clean shoes and any other outdoor equipment.

“This virus is exceptionally hardy and can live in frozen meat for up to two years and in things like blood for six years.

“It can be spread by people going into an affected area and taking the virus out on their shoes, or through pigs eating scraps that contain affected product.

“We have a zero tolerance approach to people who lie about what they have in their luggage and we’ve refused entry to Australia for six people caught with biosecurity risk material.

“If returning Australians do the same, they could face criminal prosecution or civil court action, and be ordered to pay up to $420,000 and be sentenced to up to 10 years in jail.

“That is how seriously we’re taking this threat.

“In less than a year we’ve seized 32 tonnes of pork from air travellers and recent testing showed that about 50 per cent of seized product contained African swine fever.”