AN ACCC report into the agricultural sector released on Friday has highlighted a range of harmful practices including contract terms that inefficiently allocate risk, harmful use of bargaining power, a lack of transparency and instances of commercial retribution against farmers. 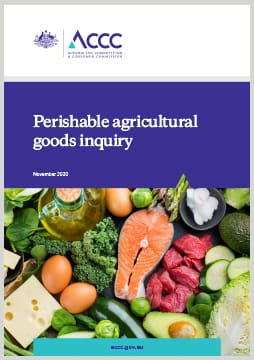 Releasing the findings from its three-month Perishable Agricultural Goods Inquiry on Friday, the ACCC said Australia’s perishable agricultural goods markets need a new fair trading law to address harmful practices arising from bargaining power imbalances that are not covered by current laws, the ACCC has found.

The Perishable Agricultural Goods Inquiry Report the introduction of an unfair trading practices prohibition, and the strengthening of the small business unfair contract term protections and the Food and Grocery Code of Conduct.

It also recommended measures be introduced to increase price transparency in supply chains.

National Farmers’ Federation Chief Executive Tony Mahar said the NFF wholeheartedly supported the ACCC’s recommedations and asked the Government to demonstrate its commitment to a fair go for Australia’s farmers by implementing them in full.

“What the ACCC have found is not surprising but deeply concerning – that food supply chains are rife with bargaining power imbalances and misuse of power against farmers,” Mr Mahar said.

“I have heard countless examples from our horticulture growers of buyers using short notice cancellations to exploit growers and drive down prices.

“Once the farmer has picked and packed the produce, they get a phone call from the supplier stating they are cancelling the order, in the same breath they make a ‘new’ order for the same produce at 30-40% discount. This is outrageous.”

“The inquiry found that a number of features of perishable agricultural goods supply chains have the potential to cause harm to suppliers and the efficiency of markets more generally,” ACCC Deputy Chair Mick Keogh said.

“In most perishable agricultural goods markets, there are many farmers, but few processors or wholesalers, and even fewer major retailers.”

“This makes farmers particularly vulnerable to issues stemming from limited competition at the wholesale or retail level. In addition, the more perishable a product is, the weaker the farmer’s bargaining power often is,” Mr Keogh said.

The ACCC heard a range of allegations about conduct by parties with strong bargaining power relative to their suppliers. Allegations listed in the report include unilateral variations of supply terms which greatly affect farmers’ income, and commercial retribution for suppliers who seek a price increase or raise concerns about the conduct of the other party.

“We will investigate potential unfair contract terms in the chicken meat industry following this inquiry, as well as reports that some horticultural wholesalers are trading in breach of the Horticulture Code,” Mr Keogh said.

The report says a lack of price transparency in markets for perishable goods can also weaken bargaining power. This is particularly the case for farmers, who are typically not in a position to influence the prices they receive for their goods.

“The effects of imbalances in bargaining power can weaken confidence in markets, reduce incentives to invest, and result in slower productivity growth,” Mr Keogh said.

The report says that certain reforms already being considered would address some of the issues identified through the inquiry. These include proposals to strengthen Australia’s small business unfair contract terms law, and the ACCC’s new small business collective bargaining class exemption, due to come into effect in early 2021.

However, the ACCC considers that these upcoming changes will not be enough to address all the significantly harmful practices identified in the inquiry.

The ACCC has therefore recommended the introduction of an economy-wide unfair trading practices prohibition to address conduct that causes significant harm to businesses.

“Australian governments and agencies are already discussing a potential prohibition on unfair trading practices, and the findings of our report are further evidence that it’s needed,” Mr Keogh said.

Bargaining power imbalances are also present at the wholesale level of the supply chains of perishable agricultural goods, and processors and wholesalers exist in a highly contested, tough bargaining environment, the report says.

The ACCC has recommended that the Food and Grocery Code, which governs certain conduct by grocery retailers and wholesalers in their dealings with suppliers, be made mandatory and include penalties for contraventions.

The ACCC also recommended that governments and industries should explore measures to increase price transparency in perishable agricultural goods industries, in order to increase competition.

The inquiry found that the introduction of the mandatory Dairy Code has increased transparency of prices and contracting arrangements, and reduced barriers to farmers switching between processors, which encourages competition. While there may be room for improvement in some aspects of the Dairy Code, the ACCC considers that it is too early to be recommending substantial changes to the Code.

The full report is available at this link.

On 28 August 2020, the Treasurer issued a direction to the ACCC to hold an inquiry into markets for the supply of perishable agricultural goods.

The analysis in the report is based on information gathered specifically for this inquiry, and also draws on information obtained through past ACCC inquiries, market studies and investigations.

The ACCC received over 80 submissions to the inquiry, more than half of which were subject to confidentiality claims. Submissions were received from participants and representatives across many perishable goods markets and from different levels of the supply chain.