The competitiveness of Australian beef and cattle markets could be improved by the adoption of objective carcase grading, improvements to the nature and coverage of market reporting, and the implementation of a range of measures to lessen the risk of collusive and anti-competitive behaviour in saleyard auctions.

These are the key recommendations from a six-month study of Australian beef and cattle markets by the Australian Competition and Consumer Commission. 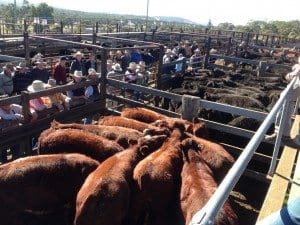 An interim report was released today, and the ACCC is now seeking industry feedback.

“In the course of our market study we’ve listened to a wide range of industry concerns about anti-competitive conduct, industry practices, and market structures,” ACCC Chair Rod Sims said.

“The ACCC’s interim report has identified serious shortcomings in current price reporting and the independence and auditing of carcase grading, and concerns about cartel and other conduct affecting competition in saleyard auctions.”

The ACCC’s assessment is that prices for many cattle transactions are not reported or poorly reported, resulting in producers and buyers not having the data they need to make informed business decisions.

The ACCC also has concerns about a lack of independence and transparency in the process of grading carcases at abattoirs. Concerns include whether the existing audit systems ensure the integrity of the grading process.

“Integrity and trust in the grading system are essential, given its role in determining payments and signalling the demands of the market to many producers,” ACCC Commissioner Mick Keogh said.

“Additionally, we are concerned there are features of saleyard auctions which make them susceptible to anti-competitive behaviour. During the course of this market study, we have heard specific allegations of cartel and other anti-competitive conduct involving saleyards which the ACCC is now assessing separately,” Mr Sims said.

The report notes further consolidation among processors also has the potential to substantially lessen competition in regional markets and says the ACCC will continue to scrutinise any future mergers closely.

“Such scrutiny would be greatly assisted by our work on this study,” Mr Sims said.

The cattle and beef market study interim report makes 14 recommendations stemming from the ACCC’s analysis of the industry to date.

“We see opportunities for meaningful improvements in the cattle and beef supply chain. Some great work is already underway in the industry, for example the introduction of objective grading. The ACCC encourages industry leaders to embrace other reforms that will lead to greater transparency and efficiency,” Mr Keogh said.

The ACCC is seeking comments on the interim report by 23 November 2016.

“The Australian Meat Industry Council welcomes the release of today’s interim report from the ACCC.  Our priority is to utilise the consultation period to ensure the outcome of these recommendations strikes a fair balance between driving greater transparency without adding to the substantial regulatory burden already faced by industry participants.

The industry is already actively working to address a number of the issues raised in the ACCC’s interim report, notably through the introduction of objective carcase measurement technology which will greatly improve the dynamic between processors and livestock producers.

We look forward to working with all industry stakeholders throughout the consultation period and are committed to keeping the Commission updated with our progress to deliver meaningful improvements across the sector.”

“Cattle Council have welcomed the Australian Competition and Consumer Commission’s interim report into the cattle and beef sector, saying it puts the focus back on producers and their needs to run profitable farming businesses.

“CCA will take its time to consider the draft report and its recommendations carefully however, at first glance many of the recommendations align with key policies Cattle Council is pushing for and we believe will benefit the whole of industry.

“The ACCC have recommended the industry move to objective carcase measurement as soon as possible, which would provide benefits to both producers and processors, and create efficiencies across the supply chain,” Mr Smith said.

Objective carcase measurement is key to moving industry towards value-based marketing, and away from the current price-averaging system.

The draft report also recommended improvements be made to existing market reporting through standardising, to enable effective comparison to be made.

“Improvements to market reporting and information have been a focus of Cattle Council’s recent work with MLA. We will continue to drive this further, developing market reporting and tools that deliver outcomes producers but do not add regulatory or administrative burden to the industry,” Mr Smith said.

“Easy-to-use tools and market reporting that can assist producers in making informed business decisions is essential to the future profitability of the industry.”

Other findings in the report outlined the need for CCA and other bodies to lead a better flow of information and producer education surrounding price grids and carcase feedback.

Cattle Council has already instructed MLA to explore avenues for more producer education and will be seeking more information on the status of the project.

“When the study was announced I said it would be beneficial to get an independent assessment of the health of the Australian beef market,” Mr Smith said.

“As CCA looks to the future of the industry we are pleased to see the report bringing the focus back to the producer and improving the balance of risk within the supply chain. Making better on-farm decisions can result in positive flow-on effects for the whole supply chain.”

Cattle Council look forward to working more with the ACCC on the recommendations, before the final report is released at the end of the year.

Background details from the ACCC:

The ACCC launched this market study into the cattle and beef industry in April 2016. This was driven by a combination of issues raised through previous ACCC investigations and in the Senate Inquiry into the effect of market consolidation on the red meat processing sector.

Five public forums were held in key cattle production locations throughout June 2016, which were attended by a number of Commissioners, where market participants and interested parties were invited to share their views about competition and fair trading issues that concern them.

Recent ACCC activity in the red meat sector has included the ACCC review of the proposed acquisition of Australian Consolidated Food Investments Pty Ltd (Primo Smallgoods) by JBS USA Holdings Inc. In February 2015, the ACCC decided not to oppose this acquisition, as it was considered unlikely to substantially lessen competition in any market.

The ACCC also investigated allegations nine meat processors collectively boycotted the prime cattle sale at the Barnawartha saleyard on 17 February 2015. However, the evidence obtained did not demonstrate that the processors had reached an agreement or an understanding not to attend the sale.