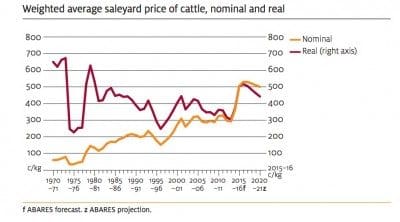 Saleyard cattle prices are tipped to increase by 25c/kg on average next financial year based on a trifecta of improved restocker interest, a low Australian dollar and robust export market demand, according to ABARES.

The Government commodity forecaster unveiled its forecast for cattle prices for the next five years at its annual Outlook conference in Canberra today.

The weighted average saleyard price of cattle this financial year (2015-16) is expected to finish at 505c/kg (dressed weight), the highest in real terms since 1980–81.

In 2016–17 ABARES believes the average saleyard price will increase further to average 530c/kg, largely because of tight cattle supply relative to demand as producers look to rebuild herds.

Looking further ahead, ABARES thinks the impact of stronger competition in major export markets and the increased cattle supply that will result from the current focus on herd rebuilding will see prices decline gradually to average 442 cents a kilogram in 2020–21 (in 2015–16 dollars).

In the short term, the combination of strong domestic restocker demand, an assumed relatively low Australian dollar and robust international demand for Australian beef and veal is expected to increase cattle prices.

However, that is balanced against the impact on demand that increased competition is set to have in key export markets, particularly from South America. 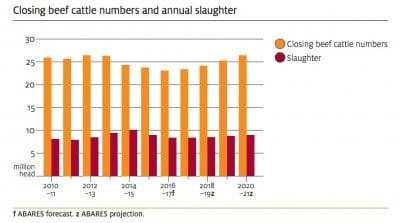 ABARES believes the national beef cattle herd will fall by 2pc to 23.7 million head by the end of 2015–16, with female numbers back to their lowest level in more than a decade.

In 2016–17 Australian cattle and calf slaughter is forecast to fall by a further 7pc to 8.4 million head, as herd rebuilding continues – assuming favourable seasonal conditions.

The smaller breeding herd will curb the pace of herd rebuilding, because it will limit the number of calves born, while continued favourable saleyard prices will also encourage producers to turn off mainly male cattle.

Consequently, the national herd is forecast to continue to decline by a further 3 per cent in 2016–17 to 23.1 million head.

In 2015–16 Australian beef and veal production is forecast to fall to 2.4 million tonnes (carcase weight), 9 per cent lower than the record 2.7 million tonnes in 2014–15. This mainly reflects the lower supply of cattle for slaughter being partially offset by increased slaughter weights.

In 2016–17 beef production is forecast to decline by a further 7 per cent to 2.3 million tonnes. Over the outlook period to 2020–21, average slaughter weights are expected to continue to increase, driven by relatively high feedlot turn-off and lower female cattle slaughter. Combined with a gradual increase in the number of cattle slaughtered, this is projected to result in higher beef production. In 2020–21 beef and veal production is projected to reach 2.5 million tonnes, which would be 8 per cent above the average production of 2.3 million tonnes in the five years ending 2014–15.

Australian exports of beef and veal are forecast to fall by 12 per cent in 2015–16 to 1.2 million tonnes (shipped weight), in response to the forecast reduction in domestic beef production.

Over the latter part of the outlook period, beef production is projected to rise gradually in response to increasing beef cattle numbers and higher slaughter. Australian beef and veal exports are projected to reach close to 1.3 million tonnes in 2020–21.

In 2015–16 the value of Australian beef and veal exports is forecast to increase by 4 per cent to $9.2 billion. This is followed by a 4 per cent decline in 2016–17 to $8.8 billion as the forecast decline in export shipments more than offsets rising export prices. By 2020–21 the value of Australian beef exports is projected to reach $8.5 billion in real terms, with declining export unit values offsetting a recovery in beef export volumes. This compares with the average value of $6.1 billion for the five years ending 2014–15.

United States: Exports to the US are forecast to decline by 26pc from the record levels of 2014-15 to 350,000 tonnes this financial year. That level would still be 67pc higher than the five-year average. The reduction is due largely to tighter supplies of Australian beef due to herd rebuilding. Exports are then forecast to fall to 325,000t in 2016–17, and to 280,000t by 2020-21 as increases in US manufacturing beef production place downward pressure on demand for imported beef. A marked rise in beef imports from South America, particularly Brazil, over the medium term could also affect Australian exports to the market.

Japan: In 2015–16 Australian beef exports to Japan are forecast to fall by 8 per cent to 280 000 tonnes, reflecting lower import demand in the face of high import prices. Australia’s share of the market is expected to increase thanks to a relatively weak Australian dollar against the US dollar. Tariff cuts delivered to Australia through the Japan–Australia Economic Partnership Agreement (JAEPA) are also expected to benefit Australian beef exports to Japan. From 1 April 2016 tariffs on Australian chilled and frozen beef will be 30.5 per cent and 27.5 per cent, respectively. This compares with a tariff rate of 38.5 per cent for beef imports from the United States. In 2016-17 exports are forecast to increase by 2pc to 285 000 tonnes. However, over the medium term, growth in Japanese demand for beef is expected to remain weak, restricted by a declining and ageing population and low-income growth. By 2020–21 Australian beef and veal exports to Japan are projected to reach 300 000 tonnes, an increase of around 1 per cent a year.

South Korea: Exports are forecast to increase by 11 per cent in 2015–16 to 175 000 tonnes. Strong beef consumption growth combined with limited domestic supply, is expected to lift import demand. Exports in 2016–17 are forecast to rise by 3 per cent to 180 000 tonnes. Over the medium term, exports are projected to increase annually by 3 per cent a year to 200 000 tonnes in 2020–21. Korean demand for imported beef will continue to be supported by tariff rate reductions delivered through free trade agreements signed with Korea’s two largest imported beef sources, Australia and the United States.

China: Australian beef exports to China in 2015–16 are forecast to increase by 20pc to 150 000 tonnes. Following two years of high growth, Australian beef export volumes to China declined in 2014–15 after China began testing beef imports from Australia for hormone residues. Australian producers have since implemented protocols to satisfy the additional Chinese testing requirements and exports have again increased. In the second half of 2015 export volumes were 41 per cent higher than in the same period in 2014. Chinese import demand for beef continues to be strong, as growth in consumption outpaces increases in domestic production. In 2016–17 Australian beef exports are forecast to increase by 7 per cent to 160 000 tonnes. Over the medium term, Australian beef exports are projected to increase on average by 3 per cent a year to 180 000 tonnes by 2020–21. Demand for Australian beef will be supported by the China–Australia Free Trade Agreement (ChAFTA), which came into force on 1 December 2015. However, future growth in Australian beef exports to China is expected to be limited by increased competition, particularly from South America. In 2015 Australia’s share of total Chinese beef imports fell to 33 per cent, compared with 45 per cent in 2014. In contrast, South America’s share rose to 47 per cent—with imports from Uruguay increasing by 38 per cent to 123 000 tonnes and from Argentina by 151 per cent to 43 000 tonnes. South America’s largest beef producer, Brazil, regained access to the Chinese beef market in July 2015 following the removal of China’s bovine spongiform encephalopathy related import bans. Chinese beef imports from Brazil have increased rapidly. In the last quarter of 2015 imports from Brazil reached 41 481 tonnes, to make it the second-largest source after Australia (41 828 tonnes). In December 2015 Brazil was the largest single source of imported beef.