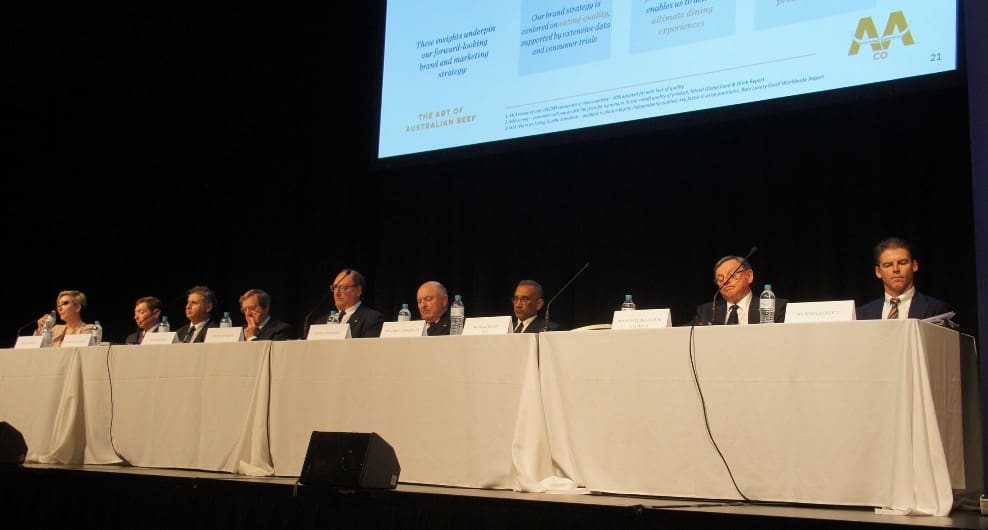 Directors at this morning’s AA Co AGM in Brisbane

GIVEN the dramatic events of the past three months including the closure of its Livingstone beef plant near Darwin and a substantial financial year loss, this morning’s Australian Agricultural Co annual general meeting was anticipated by some to be likely to be a fiery affair.

But a small turnout of about 70 shareholders in Brisbane, ranging from institutional to ma-and-pa investors, remained surprisingly subdued.

As expected, questions seeking explanation about the Livingstone Beef plant’s performance and closure were forthcoming, but the topic hardly dominated proceedings during questiontime. In no way could the mood have been interpreted as ‘voter backlash.’

A one-off write-down of $74.9m was recorded for Livingstone Beef, reported separately for the first time. The result saw the AA Co board take ‘decisive action’ by suspending operations indefinitely at the site – Australia’s newest beef processing plant commissioned under great fanfare in 2016.

Those attending this morning’s AGM event anticipating a shareholder revolt over the performance were sorely disappointed.

At worst, shareholders registered mild disapproval through the boardmember re-endorsement process, which produced some of the lowest votes in support seen in recent company history.

One veteran AA Co stock watcher put the patient shareholder mood partly down to the influence of a single dominant overseas investor on the share register – UK investor Joe Lewis’s Tavistock Investments, which owns around 43pc of the stock. Some felt Tavistock’s significant hold on the company diluted smaller shareholder appetite for a fight.

What went wrong at Livingstone? 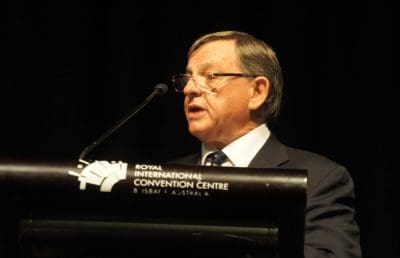 Answering a shareholder question about ‘what went wrong’ at Livingstone, AA Co chairman Don McGauchie  said a lot of complex issues were involved in the decision to ‘mothball’ the plant.

“But basically we just have not been able to achieve the throughput volumes of the numbers of cattle necessary to make the plant work,” Mr McGauchie said.

“There were bedding-down problems, as there are with any new meatworks in a new area; we brought in a lot of outside assistance in terms of getting plant management up to the standard that we needed to make it work effectively. But substantially, it’s about numbers: we were killing about 100,000 cattle a year, and it probably needs 150,000-plus to make it work. They were the sort of numbers we were looking at when we originally made the decision to build,” he said.

“We researched that extremely well to see what sort of cattle numbers were out there in the north. But some big things happened. The first was the impact from the live cattle export ban, and the combination of that with the drought that occurred in Queensland at that time saw a massive kill-off of cattle in Australia. That kill-off happened before we had the plant finished and operational.”

That herd reduction, of about four million head on a sustainable basis, saw a lot of processors from eastern Australian and southern Australia venturing further north, taking cattle from the area that Livingstone would normally draw from, Mr McGauchie said.

“The herd rebuilding that’s gone on since then – particularly in the Northern Territory – are the sort of cattle that Livingstone would normally seek to process,” he said.

The other big change that occurred was that the live cattle export market came back in an expanded fashion, so slaughter cattle that would normally have been expected to be directed into Livingstone in some cases were exported live.

“That’s not the major factor, but it was one of the contributors that have built into the situation where the numbers are not sufficient to make the works viable, for the time being,” Mr McGauchie said.

As the board analysed those circumstances over the past 12 months or two years, it became increasingly obvious that conditions were not going to change fast enough to justify the losses occurring in the short term. “So the decision was made to mothball the plant,” he said.

“With the great benefit of hindsight, it would have been good to have done that 12 months earlier. But as we brought the new management team in to properly analyse the situation, and look at whether the numbers would return quickly enough to justify carrying further losses, the decision made by the board and senior management was that that was not the case.”

Mr McGeochie said that if the opportunity again arose to re-start operations at the plant, the company would do so. 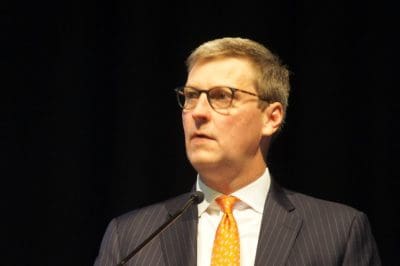 While both chairman Don McGauchie and managing director Hugh Killen spoke of ‘green shoots’, and the creation of a ‘simpler, more productive’ AA Co business model, they described having to make ‘tough decisions’ to allow the company to focus on its core business.

“In management, distraction is one of the most difficult things to deal with. Being distracted away by something that isn’t as core as it could be, can have a big impact on the performance of the better parts of the business,” Mr McGauchie said.

But the company had now moved to focus on its core competencies, and to continue the company’s shift away from commoditised beef, towards being a producer of luxury beef brands, at scale. This included the decision to suspend operations at Livingstone, and to revamp its 1824 beef supply chain.

Mr McGauchie said this year’s earnings result was impacted by a number of factors. These included increased competition affecting the most commoditised end of the company’s product portfolio, and increased input costs driven by dry weather conditions. Volumes also decreased in line with the strategic decision to move away from a reliance on external cattle supply.

“We’re proud to have stewardship of a blue-chip portfolio of pastoral assets in some of the best cattle country in the world. But most importantly, it’s how these assets work together that creates value for our business,” he said. “Unlocking that value hasn’t been just about integrating our properties to form a value-adding supply chain, it is also about ensuring we have the right infrastructure and assets in place to produce luxury beef at scale, and to do that consistently.”

“That means investment in marketing, in logistics, lotfeeding, pasture management, and in herd improvement. It’s these strategic decisions that positions AA Co to capture growth and realise shareholder value over the long-term.”

Managing director Hugh Killen said 2018 had been a difficult year of challenges for AA Co, describing the 2018 annual report as a ‘tough set of numbers.’

“It’s involved difficult, yet necessary decisions that are about turning AA Co back towards growth,” he said.

“There is a highly profitable business within AA Co – but we must unlock that value. What is clear is that we need to create a simpler, more productive and more profit-focused AA Co if we are to deliver on the company’s potential.”

“To do this, we have a clear set of goals and metrics to guide and measure our progress. We need to focus on our people, our customers and how we’re running our business if we’re to deliver strong financial performance over the long-term,” Mr Killen told investors.

“What you see before you is our balanced scorecard. And it is not satisfactory. While there are some positives, our overall business and financial performance is not where we want it to be. That’s why we are making tough decisions now. And we look forward to updating you on our progress against these metrics as we move through the 2019 financial year.”