Any publicly-listed company’s annual general meeting where just three shareholder questions are asked of the board can be seen as a measure contentment over company direction and performance.

The 2022 AGM held by the Australian Agricultural Co yesterday attracted only the most cursory shareholder scrutiny, and one of the questions asked was the perennial, ever-hopeful inquiry about shareholder dividends. AA Co has famously failed to deliver a dividend to shareholders for the past 15 years. 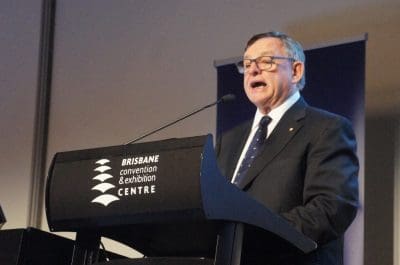 This year’s AGM was held both live in Brisbane, and via teleconference. Financial results for the company’s 2021-22 financial year were delivered earlier – click here to view.

Shareholder Hugh Major asked the board what the company intended to do with its mothballed Livingstone beef processing plant near Darwin.

Live exports out of northern Australia have halved this year, suggesting there might be more cows and younger cattle available for slaughter.

“Livingstone is currently being maintained in a suspended state, which would allow us to restart the facility efficiently when feasible,” chairman Don McGauchie said.

“But current market conditions are not conducive to restarting the asset, and we are exploring   opportunities at the site to add additional value to the business,” he said.

Shareholder Max Cullen asked where the live export class action against former Labor Agriculture minister Bill Ludwig was up to.

Mr McGauchie again confirmed that AA Co was a member of the class action,, and was actively pursuing its claim for compensation. In June this year, the Federal Court found in favour of the Brett Cattle Co, the lead applicant over the matter.

“As a group member of the live cattle export action, AA Co is entitled to have its damages determined. This claim may be resolved either by negotiation and agreement with the commonwealth, or if not, by the court itself. A this point the quantum of each group member’s claim is yet to be established, and negotiations with the commonwealth, even after all this time, are still at an early stage,” Mr McGauchie said. “Therefore it is premature at this point to provide any estimate of AA Co’s compensation.”

A shareholder from floor, who said he had held stock in the company “through all the ups and downs, since the start”, asked what was happening about a dividend this year, given the company had returned a sizeable profit.

“What’s going on? No dividend has been issued by the company to shareholders for years,” he said.

“Certainly this year, given that the actual cash profit was not that substantial, we have very significant investments we need to make in the business,” Mr McGauchie said.

“We have capital to deploy in key areas for growth which includes development on our properties,” he said. “The opportunity is there to improve the land assets in a range of ways, including provision of more waters and fencing, and development of water assets we hold in the north, in addition to feedlot capacity, which will require some upgrading as well.”

“In the Gulf of Carpentaria, we will focus on our irrigation project which aims at developing our water rights. A successful dryland trial has already taken place as part of this project boding well for the future. We will continue to work on strengthening our relationship with stakeholders in this region,” he said.

“This is a capital-hungry business, and we’re not in the business of borrowing any more money than we need to – I think that was done probably a little heavily in the past,” Mr McGauchie said.

“Even though our asset value has increased, debt has not diminished, and heading into the higher interest rate regime as we are, our intention is to invest profits back into the business to develop the base of the business.”

“This, along with rising inflationary pressures will impact the cost of key inputs across the beef supply chain. But we believe we have the discipline, capability and resilience to manage these pressures.”

Faced with another year of challenges, AA Co’s positive results in 2022 were shaped by resilience, discipline and ingenuity, Mr McGauchie said.

“The value of our pastoral property and improvements grew over the year, consistent with a long-term trend in our business. These assets are now valued at $1.2 billion, supporting our net assets value of over $1.3 billion,” Mr McGauchie said.

Delivering his first report as acting chief executive officer following Hugh Killen’s sudden departure last month,  Dave Harris said there were some macro dynamics the business was monitoring which highlighted AA Co’s need to continue to build resilience and focus on its strategy.

“We and industry are mindful of the potential risks and challenges of Lumpy Skin Disease and Foot and Mouth Disease,” he said.

“We are being proactive in our engagement with the government and our industry partners who are responsible for Australia’s management of these issues, while also considering our own mitigation practices across our properties.”

“Global supply chains are continuing to experience difficulties, and we’re observing rising inflation and rising interest rates worldwide. There are also positives though, including the strong rebound of food-service which we anticipate will continue in our key markets. This will support the continued delivery of the full potential of our brands.”

Mr Harris said the company’s focus on executing to strategy and maximising returns from every cut of meat produced drove increased sales margins this year.

“We leveraged higher demand as food service started to return following the COVID shutdowns, and targeted allocation of Westholme Wagyu in the US, to optimise our sales and achieve solid price increases. This success, along with higher cattle sales margins was the driving force behind our strong results,” he said.

“We’ve seen this commitment flow through into our FY22 results, which was one of our best financial performances ever. This is a direct result of delivering on our strategy.

Key operating results he highlighted for the year included:

“This is our strongest net profit result since listing on the ASX,” Mr Harris said.

“We have also begun work on each of the five major commitments launched in November 2021 with our sustainability framework, the first of its kind for the Australian beef industry – landscape carbon, natural capital, methane emissions reduction, animal health and welfare certification and the Wylarah Institute.

“We’re encouraged by the response to our sustainability framework from industry and government and we’ll continue to work hard to achieve our desired outcomes. This is a priority for AA Co and another area in which we will continue to invest in FY23,” Mr Harris said.

AA Co closed yesterday at $1.85, down from its June high of $2.37 at the time Twiggy Forrest was buying large volumes of stock.