92,500 megalitres to be released in Flinders and Gilbert River catchments 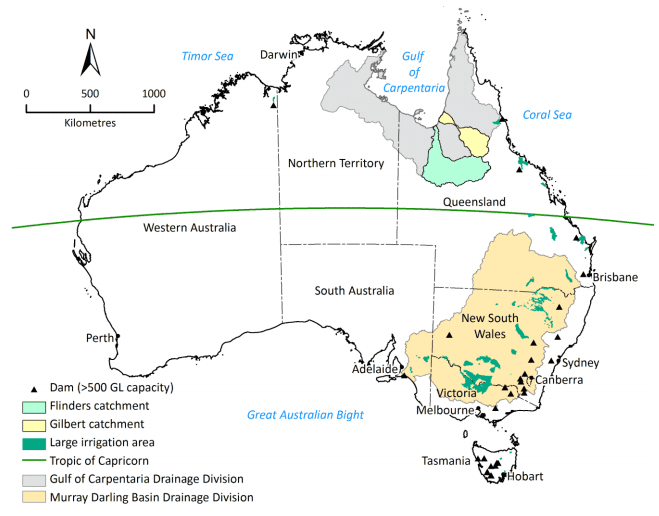 The Flinders and Gilbert River catchments in North Queensland are highlighted in light green and yellow. Source: CSIRO. Click on map to enlarge.

92,500 megalitres of water will be made available from late August in the Flinders and Gilbert River catchments, a move that AgForce says will help to unlock the enormous potential that exists for irrigated agriculture in north-west Queensland.

Queensland’s Natural Resources and Mines Minister Dr Anthony Lynham told a parliamentary estimates hearing this morning that the water release will help to quickly satisfy the demand that exists in the region from agricultural producers wanting to expand as well as add value to their enterprises.

“It is proposed that the release will be at a fixed price rather than a tender process, because this will enable rapid and efficient release of water – and that’s ideal for high value existing enterprises or shovel-ready projects that need water,” Dr Lynham said.

The water will be unallocated water from the general reserve and comes on top of water licences totalling 100 000 megalitres granted earlier this year in the Gulf water plan area.

He said the Department of Natural Resources and Mines will engage with local landholders, and the Etheridge Shire Council.

Once DNRM had consulted locals, it would finalise sale conditions and call applications.

“DNRM will be in the area, speaking to landholders and council over the next few weeks,” he said.

“I’d encourage landholders and local businesses interested in buying this water to monitor their local newspapers and DNRM’s website for application details.”

Already 220,000 megalitres of water entitlements have been granted in the Flinders catchment and another 631 550 megalitres of general reserve remains unallocated in the Gulf water plan area. AgForce water spokesman Kim Bremner said the release was a positive step towards “unlocking the enormous potential for irrigated agriculture in north-west Queensland”.

“The potential for irrigated agriculture in north-west Queensland and the idea of a ‘northern food bowl’ has long been talked about but access to water has always been a critical factor holding back development in the region,” he said.

“Only last month I joined with the AgForce Grains Board to visit the north-west and meet with primary producers eager to pursue cropping opportunities.

“Many of the producers we spoke to missed out in the previous water tender process and have been frustrated only a small amount of allocated water has been used so far, so a new release of water now is timely and consultation with local stakeholders on the sale conditions will be important.

“AgForce is keen to see the water releases converted to on-the-ground development and the flow on employment and economic benefits as soon as possible.”

Mr Bremner said AgForce supported further cropping development in northern Queensland and the use of a science-based process to identify water resources that could be sustainably developed while also protecting any significant natural values in the area.

“We want to see the Queensland Government work closely with industry to overcome the challenges to sustainably developing the north, including access to water and the need for sensible and balanced vegetation management laws,” he said.

In December 2013 the CSIRO released the results of a two-year, $6.8 million feasibility, economic viability and sustainability study involving more than 100 scientists of agricultural development in the Flinders and Gilbert River catchments.

The Flinders and Gilbert Agricultural Resource Assessment (FGARA) found that thousands of hectares of soil are potentially suitable for irrigated agriculture across northern Australia but access to sufficient water constrains development.

The Assessment sought to identify and evaluate water capture and storage options; identify and test the commercial viability of irrigated agricultural opportunities and assess potential environmental, social and economic impacts and risks.

“The novel methods developed for the Assessment provide a blueprint for rapidly assessing future land and water developments in northern Australia,” the CSIRO said.

“Importantly, the Assessment has been designed to build a knowledge base to inform future development decisions. It does not recommend one development over another.”

The Assessment concluded that:

Sources: Qld Government, AgForce, CSIRO. More information on the Flinders and Gilbert Agricultural Resource Assessment can be found at this CSIRO link.