300 at Barnawatha back Senate inquiry into processor consolidation

A NSW-Victorian call for a Senate inquiry into processor consolidation in the red meat industry might already have had an impact on the government. 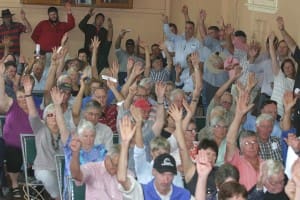 More than 300 NSW and Victorian farmers voted today to support a cross-border campaign for a Senate inquiry into market consolidation in Australia’s red meat processing sector.

In the northern Victorian town of Barnawatha today between 300-400 beef and sheepmeat producers strongly supported a call by NSW Farmers and Victorian Farmers Federation leaders for an inquiry, following a processor boycott of a pre-sale weigh cattle sale at the Barnawatha saleyards on February 17.

The meeting was also called in protest at the Australian Competition and Consumer Commission’s sign-off on JBS Australia purchasing smallgoods manufacturer Primo, but also to delay a decision by Treasurer Joe Hockey on the acquisition.

A spokesman for Mr Hockey said the treasurer is aware of the issue, “however no decision has yet been made.”

NSW Farmers policy director John Dunn said farmers from NSW and Victoria sent a clear message to the treasurer today that he set aside his decision on the acquisition of Primo by JBS Australia until a full Senate inquiry can investigate market consolidation in the processing sector.

Producers in the meeting voted by a raise of hands to support the joint VFF-NSW Farmers move to seek a Senate inquiry.

“The single issue here is the power of the processors in this sector and that power has gone too far.”

Producers at the meeting were directed to email and tweet a list of MPs and senators about their concerns over the Barnawatha boycott and processors’ market power, the ACCC’s “lack of power”, the need for a Senate inquiry and for Mr Hockey to step in over JBS Australia’s Primo purchase. 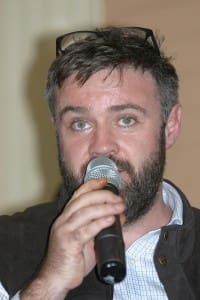 Mr Dunn said there had also been strong indications of broader national producer and National Farmers Federation support for the inquiry call.

VFF Livestock Group president Ian Feldtmann said the meeting gave a very strong clear message that producers have “had enough and they are not going to take anymore.”

“Today was really a result of the buyers withdrawing from the market at Barnawatha.

But what that did was bring to the surface the anger among producers on the whole processing and buying system throughout the eastern states which they have been forced to operate under – post sale weighing,” he said.

“With the consolidation of processing works in Australia that’s in their eyes a clear indication that competition is going to be reduced.

“The message from the floor is that they definitely wanted us to pursue a Senate inquiry and part of that is based on the purchase of Primo by JBS, which is demonstrating a reduction of players in the market and a lack of competition over time.”

Mr Feldtmann said the ACCC Competition Compliance Team is investigating the incident, “but this is not an isolated problem, it is a symptom of the structural inequity that exists in the cattle market.”

“Market consolidation in the meat processing sector is causing lower returns to farmers and it is time this trend is stopped,” Mr Feldtmann said.

“The treasurer must set aside the approval of the JBS acquisition until a full senate inquiry can investigate this issue.”

Chair of NSW Farmers’ Cattle Committee Derek Schoen made a direct plea to the treasurer: “Put this decision on hold until all the facts are tabled.

“If we get this decision wrong, farmers will lose.”

“What is the point of protecting our agricultural land from too much foreign acquisition when all of our produce will be processed and controlled by a select few?,” he asked.

“This is an issue which demands a serious examination of the national interest.

“Farmers just want a fair go; a fair price for their produce,” he said.

“If the treasurer approves this decision it will have long term ramifications for cattle farming in Australia.”