Jack’s 18-month-old bitch Moora Dotti, bred by Macarthur farmer Barry Price, was the top priced dog in 57 Kelpies offered in the 2017 auction in Casterton on Sunday.

Dubbo truck driver Craig Lockyer paid the $12,000 willingly after seeing Dotti back and bark her way around sheep in the auction demonstration. Mr Lockyer said he had returned to the livestock business in the last 12 months after five years as a motel manager. He liked Dotti because she was obedient and had “plenty of go.”

“She’s a good backing dog and I don’t want to bark myself.”

Jack, 30, is the livestock manager at the big Melville Forest sheep farming operation Jig Saw Farms and bought his first Moora Kelpie from Barry Price as a 15-year-old stockman. He paid $700 for Dotti as an eight week-old puppy and has bought a pup from Barry each year after the auction. Jack is a well-known as a trainer of working dogs and in recent years has sold Moora bloodline dogs at the Casterton auction for $6000-$8000.

Jack said Dotti was trained and experienced, and has been working sheep in yards, trucks and in the paddock at Jig Saw Farms. The bitch barks freely on command and is easy to work with a great nature, he said.

Barry Price said Dotti was bred as an all-round dog for sheep and cattle out of Moora Cody by Moora Suey. He has been breeding Kelpies along similar lines for 35 years and sells about 30 pups each year.

“Jack got one last year, but he said he’s not selling it – it’s too good.”

Fifteen other dogs, or about a quarter of the 2017 catalogue made $5000 or more at the auction, including $9500 for Lot 37, Matthew Mooney’s Jilly, a 13 month-old well started red and tan bitch sold to the Nareeb Nareeb Partnership at Glenthompson, Victoria. 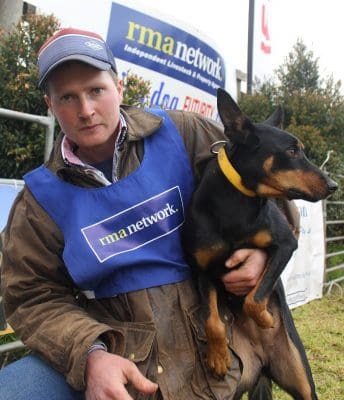 The pre-auction trial winners – Ryan Lenehan with Sovereign Lucy. Click on image for a larger view

The full-trained dogs in the auction, aged 12 months and older, averaged $5230. The started dogs, 4-12 month-old, averaged $2500 and sold to $4000 for a four month-old red and tan dog, Elfinvale Paddy, bred by Tom Austin at Melville Forest. The top-priced pup was Darren and Nicky Holmberg’s eight week-old bitch Clout which made $3000.

The dog prices were underpinned by the currently high sheep and lamb prices and expected the auction’s overall average would be higher than last year. 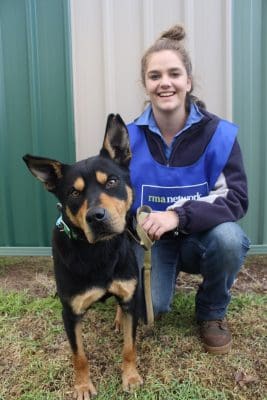 In the Casterton Kelpie Muster’s Saturday program, the Stockman’s Challenge was won for the first time by Tom McMahon from Camperdown riding seven-year-old stock horse Lincoln with his Kelpie bitch Suzzee handling the sheep.

The RMA Futurity trial was won by Tricia Carter from Melville Forest with her dog, three year-old Jet, with a score of 141 over two rounds, with Luke Twigg and Earl in second place from Ricky Jones with Bindi, third, and Shane Beauglehall with Saffron, fourth.

Tricia bought Jet at the auction last year for $6000 from Tim Hall in Tasmania and won $1250 in prizemoney by winning the trial.