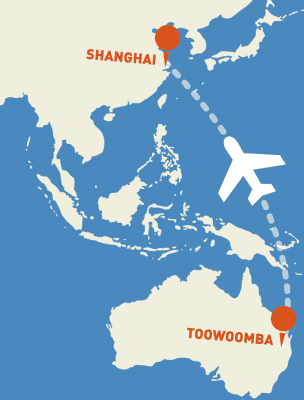 * Include this tour in 2015-16 tax – to discuss contact the Toowoomba and Surat Basin Enterprise today on (07) 4639 4600
This tour is aimed at helping people involved in Australia’s red meat industry to grow their understanding of the Chinese market, to connect with potential customers for their product or service (or expand their existing trade networks in the market), and to meet and build relationships with other delegates on the tour.
The tour takes advantage of the already well-developed trade networks established by the Toowoomba Surat Basin Enterprise (including its CEO Dr Ben Lyons who spent 18 years until 2015 living and working in agricultural trade in Shanghai), the Australia-China Chamber of Commerce and our own Beef Central and Sheep Central red meat industry contacts and networks both within Australia and China.
Features included the Ag in the Asian Century conference in Shanghai, an Australian beef extravaganza dinner, and numerous meetings and site visits with companies already involved in the Australia-China red meat trade.
Recently confirmed features include:
– An Australian beef extravaganza dinner, with invited guests including a range of Chinese beef importers
– The Ag in the Asian Century conference will hear from a range of speakers operating within China, on topics including latest consumer insights in the market and individual supply chain stories, including a social media start up for foodies in China with investment from Silicon Valley providing peer recommended restaurants and now with 250,000 followers.
– Site visits to the headquarters of Chinese online retailer Alibaba; an Australian-Chinese joint venture handling fresh beef and fresh milk into China and using tracking and temperature recording devices; Qantas’ brand new cold chain logistics site at Shanghai’s Pudong airport; an online startup delivering food from restaurants to customers, now handling about 100 million transactions per day across China, and now accrediting their full supply chain and moving into wholesale foods and beef sourcing; and a Shanghai beef importing company which imports boxed beef from Australia and has dozens of retail sites in China.
10 reasons to join this tour:

1. Accelerate your trade networks in China

Participants will have access to extensive on-the-ground trade networks, developed over several years by TSBE, Beef and Sheep Central and other well-connected organisations. The tour will also facilitate, coordinated in advance, tailored business matching opportunities for Australian companies attending with potential Chinese customers for their products and services. This a great chance for aspiring exporters to take advantage of existing networks to introduce their brand to China, and for existing exporters to further expand their trade in China.

2. Gain an in-depth understanding of the opportunities

The trade mission will provide unique access to a wide range of Chinese businesses, including the headquarters of Chinese e-commerce giant Alibaba, as well as sites of specific interest to the red meat trade between Australia and China, including existing meat importing, processing and supply chain facilities, cold chain logistics providers and free-trade-zone operations of leading red meat eCommerce platforms in China.

3.  Learn from, and build relationships with, fellow delegates

In addition to the red meat group being hosted by Beef Central and Sheep Central, the 200 or so delegates travelling on the special Qantas flight from Toowoomba’s Wellcamp airport on Sunday, October 23, will include people from a wide range of economic sectors including agriculture, e-Commerce, education and training, logistics, financial services, sustainable design, manufacturing, resources, tourism and health. Within our red meat group, expressions of interest have already been received from a diverse group including meat processors and exporters, brand program managers and owners, commercial and stud cattle producers and agribusiness advisors, with interest so far from Western Australia, South Australia, Victoria, Tasmania, NSW and Queensland. This is a great chance to spend time with other businesses and to see how they are tackling the China opportunity. Wagners global chairman John Wagner states it simply: “Any company considering doing business with China should be part of the delegation,” he says. “This is a once-in-a-lifetime opportunity to network with like-minded people who regularly deal with China.” 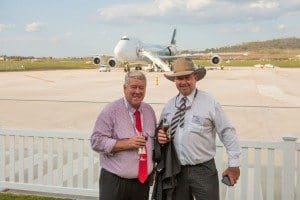 The $100 million Wellcamp Airport built by Toowoomba’s Wagner family was the first new airport to be built in Australia in 44 years. The 2.87 kilometre runway opened in late 2014, meeting an 18-month construction goal. It hosted its first international freight flight in in November last year when a Cathay pacific 747 carried a range of Darling Downs produce direct to Hong Kong. The Access China ’16 tour departure flight via a Qantas passenger jet will make history as the first international passenger flight from the airport. There is also flexibility to extend your stay, with returning flights to Sydney and Toowoomba.

An ancient and fascinating culture now rapidly modernising and poised to become the world’s biggest and most powerful economy. If you don’t understand this market, it’s time you did. Shanghai, considered China’s “capital” capital, where this tour will be focused, is widely regarded as the premier location for Australian businesses coming to China. While this tour will be business focused, there will also be numerous opportunities to experience and immerse yourself in the sights and wonders of China.

6. There’s never been a better time

With the continued growth of the 400 million strong Chinese middle class and the recent signing of the China-Australia Free Trade Agreement (ChAFTA), there has never been a better time to start building your business to China. In securing reduced tariff rates ChAFTA will make Australian product more competitive in China which in turn is expected to open up lucrative opportunities for Australian exporters. Australia-China Chamber of Commerce president Peter Arkell recently explained that since the ChAFTA was signed there has been a noticeably increased appetite for Australian business within the halls of government in China.

E-commerce and online opportunities are also providing a platform for Australian “mum and dad” producers to sell direct to China, acting as a bulk buyer and taking all the stress and risk when it comes to logistics and supply chain management. “For too long, trade with China has been seen as too difficult for many Australian businesses. With ChAFTA that no longer needs to be the case. From on the ground in China, ChAFTA takes much of the fear out of doing business with the largest market in the world,” Mr Arkell explained.

7. Attend the first Ag in the Asian Century conference in China

In our humble opinion and experience, the annual Ag in the Asian Century conference conducted by TSBE in Toowoomba over the past two years is easily one of the most constructive, highly-focused and practically useful conferences held in the agricultural space. Last year speakers included a range of companies already doing business in China, such as Elders and Sanger Australia, and Chinese customers looking to import agriculture product directly from Australia. This year the one-day conference will shift to Shanghai as part of the Access China ’16 program, assuring even greater access to key stakeholders directly involved in the Australia-China trade, in addition to providing valuable updates on consumer insights in China and information on meeting and complying with Chinese import regulations.

Sign up before June 30 to receive early bird pricing. The full five-day tour package is available for $5800 inc GST which includes five-star accommodation at the Hyatt on the Bund, breakfast daily, all transfers and internal travel in China, the full day Ag in the Asian Century conference, and access to Chinese business leaders and tailored business matching, site tours and networking events.

The overall Access China ’16 tour is being organised by the Toowoomba Surat Basin Enterprise, which is the major economic development agency for the Toowoomba and Southern Queensland region, but the tour is open to anyone from across Australia or even internationally. As mentioned earlier, expressions of interest have already flowed in from all States of Australia as well as overseas.

Travel, accommodation and food expenses incurred for business-related travel can be tax-deductible if directly connected to a taxpayer’s business or employment and for expenses directly related to the business component of a trip. It is important to check your individual circumstances in advance with you accountant, tax advisor or the ATO to ensure you know what can legitimately be claimed as relevant business-related expenses and what cannot, but as a business-focused trade mission this is well-worth keeping in mind.

For more information or to lodge an expression of interest please email admin@beefcentral.com with the subject line “China Tour 2016”.