YOUNGER steer categories and most heifers trended down in value on AuctionsPlus this week.

Numbers offered rose 13 percent on the previous week to 6957 head, with listings again dominated by the Weaner and Yearling sale, where almost 5000 head were offered.

Outstanding clearance rates were seen on Queensland weaner steers, with 85pc of the offering finding buyers. A similar trend was seen in Tasmania with 80pc clearance across the weaner steer portion.

A limited offering of joined cattle was seen this week. A highlight out of Ballandean, Southern QLD, was a line of 20 Angus PTIC heifers that sold for $920 on-farm.

Cow and calf units were offered out of QLD, NSW and VIC, with 474 head catalogued, averaging $1188/head, $10 back on the previous week.

A line of 40 Angus cross heifers and calves out of Blackall, QLD was sold for an outstanding price of $1250. The top price this week went to a line of Poll Hereford cows out of Tamworth, NSW, which brought $1570. This line of 40 Angus cross heifers and calves out of Blackall, QLD made $1250.

To further underline the current value of cow and calf units, a small lot of nine Charolais cows, 3-5 years old out of Willaura, VIC was sold for $1250.

The lighter end of steers on offer had plenty of value this week, with 1340 head offered. Weaner steers averaged 277c/kg, with a line of 114 Droughtmaster and Droughtmaster cross steers out of Richmond, North QLD averaged 250kg selling for $615/head or 246c/kg on-farm. Their older heavier 332kg brothers also achieved top dollar fetching $725/head or 219c/kg.

Top price was received for a line of 25 Angus weaner heifers from Bugaldie, NSW, returning $800/head or 268c/kg. 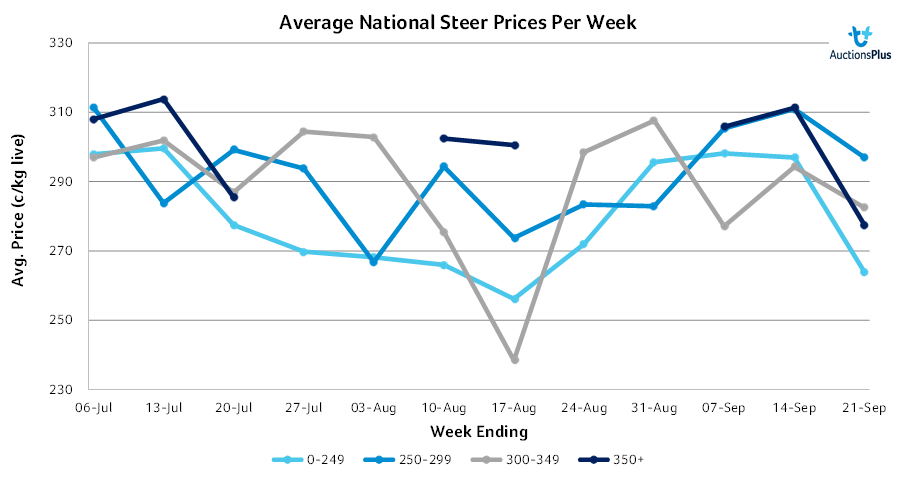