Where does the cattle price rise leave processor margins? 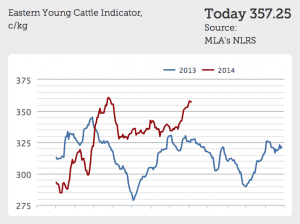 “Every meatworks cattle buyer in the Eastern states has a box of Kleenex on his desk this week,” one supply chain veteran told Beef Central yesterday, only partially in jest, in the wake of this week’s huge market movement.

But despite paying upwards of $100 a head more for quality cows this week than they did just a fortnight ago, typical export processors are still well in the black, it appears.

That’s driven, of course, by record high US demand for grinding beef, and generally strong international beef demand in destinations like China and Japan. More on that in Beef Central’s monthly export summary for August, due tomorrow or Thursday.

A reliable export processor contact told Beef Central yesterday that on current cattle purchase rates, at his plant, the processor margin on export grassfed steer was still $70-$80 a head. For best grassfed cows, processor profit, for this operator at least, is now back to $10-$15 a head, given current procurement costs.

That’s significant, because it’s the first time in a long while that processor profitability on grassfed steer has been more than that for cow. At one point best cows were making only 260-270c/kg, because of their sheer abundance in the market.

The processor breakeven on the cow continued to climb, simply on the basis of the strength in the international grinding meat market (see separate story tomorrow), whereas the steer price has been a little more consistent.

While over the past 12 months there has been a lot more profit in processing cow than steer, keep in mind that up to now, best cows were costing processors a lot less than 350c/kg.

The current extraordinary rise in prices has created its own minor dilemma for processors: despite the big, big money that’s about, there’s now signs of producers holding-back committing slaughter cattle, because they do not want to miss out on any further upwards movement in the market. How long that lasts is anybody’s guess.

“I’ve always thought that this moment was going to come, it was just a matter of when,” a prominent processor said yesterday.

“I believe there’s a new paradigm now starting to take root, in terms of cattle pricing. Prices may yet go up further, but they’re not ever going to go back down to what we saw earlier.”

“There might be some slight ups and downs, but I think this type of pricing is going to be seen consistently over the next few years. Export meat selling prices can justify it, and I wouldn’t be surprised if it goes higher.”

By Friday last week, the Queensland Cattle Market Indicator (QCMI) exceeded 200 points for the first time since March 2012, driven by the gradual upward pressure from strong processor purchasing at most Queensland saleyards over the past four months.

The QCMI is an index derived from saleyard data collected at NLRS reported yards, and includes all indicator categories from trade steers to medium cows, as well as lines that fall outside those specifications.

After spending a number of months at subdued levels, the beginning of May marked the start of a rise, with the heavy steer (500-600kg) indicator at Queensland reported markets gaining 13%, to finish August at 363¢/kg, trade steers increased 9%, to 352¢/kg, while medium cows jumped 28% over the period, to 313¢/kg – the first time cows have been above 300¢ since March 2012.

While restocker interest at most Queensland markets has been practically devoid, the demand from processors and feedlot buyers appears to be driving buoyancy in the market. With this in mind, once significant restocker demand is added to the equation, which will coincide with a contraction in supplies, it should lead to further market buoyancy. This should ultimately assist the QCMI maintaining a level above 200 points, rather than be prone to volatility.