Cows and calves sold to $1350 this week for this line of unjoined 30-month-old Santa x Herefords offered by Hassad Australia, from Trangie, NSW, heading to a buyer in Wodonga, VIC. Note conditions in the background.

CATALOGUE numbers offered lifted 17 percent on AuctionsPlus this week, reaching 10,189 head, dominated by weaners and yearlings from dry areas, which comprised almost 80pc of the offering.

Several lotfeeders were active again this week and showed interest across all commercial sales.

All four heifer weight categories showed 5-10c/kg rises in value compared with the previous week, while most steer categories trended down (see graphs below).

Cow and calf units were in short supply, with only 400 head offered. Prices ranged from $900 to $1350 and averaged $1106. Top price went to a line of unjoined Santa Gertrudis/Hereford cows and calves offered by Hassad Australia, from Trangie, NSW, purchased out of Wodonga, VIC. These 30 month olds averaged 572kg, with calves at foot by Santa bulls.

A line of unjoined two-year-old Limousin heifers with calves by Angus bulls, from Loomberah, NSW made $900.

A special sale offering of almost 60 Fulblood Wagyu females from Codenwarra Wagyu, Emerald QLD, all PTIC to Wagyu bulls and offered individually, produced a total clearance at rates from $1500 to $3100, depending on age and pedigree. All were offered with an expected BreedPlan terminal carcase index figure on the resulting calf – mostly ranging from +$120 to +$200.

The increase in weaner numbers contributed to a slide in clearance rates this week as buyers had the benefit of increased supply. Acland Pastoral Co, Oakey, QLD, offered a total of 1284 weaners across 12 lots. Among them were a line of Angus steers 7-12 months averaging 298kg sold for 285c/kg or $850, and a line of Santa heifers 7-12 months 183kg which sold for 251c/kg or $460.

There was an increase in smaller lots with 20 head or less this week, many travelling long distances from drought-challenged areas to better feed. Typical were 13 Charolais/Angus weaners selling for 262c/kg or $645 to travel 1400km from the NSW Northern Tablelands to South West Victoria; and 19 Angus heifers from the NW Slopes & Plains sold for 208c/kg or $360 to be trucked 1300km to South East Victoria.

The general practice of drafting and offering cattle into even deck loads for maximum competition is being challenged as buyers make the most of compiling several small lot sizes. 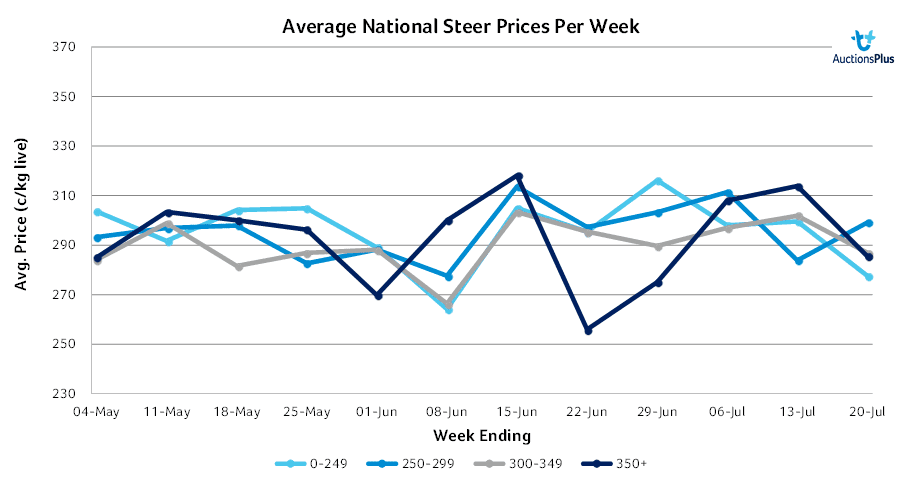 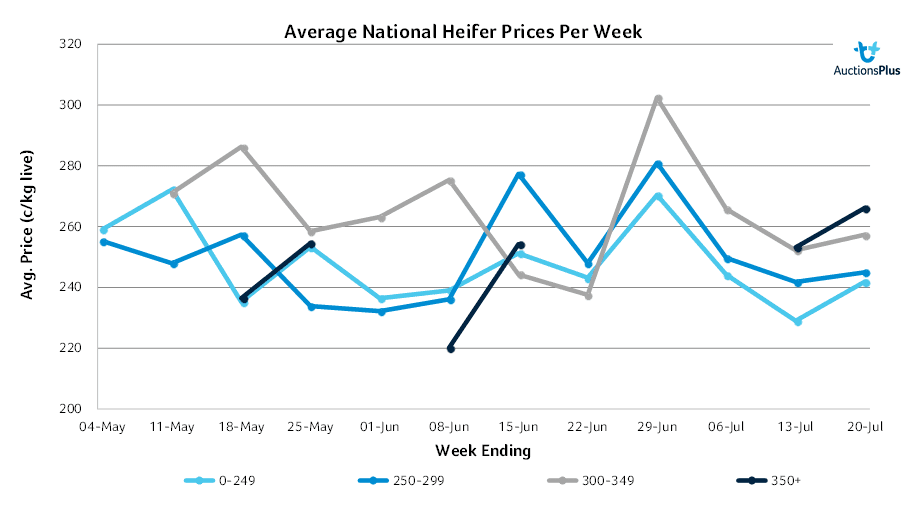