HARD old-lessons were re-taught at NVLX Barnawartha on Thursday when a softer trend was dealt out to vendors offering weaner-aged young cattle that had not been weaned.

Suffering discounts at times as much as $80 a head or 20 cents a kilogram, lots that had not been well-prepared for the next stage of their production journey were severely marked down compared to those where the work had been done.

Most of the heavy discounting was dispensed on the top-end lead drafts within the opening lane of the weaner run which caused a flow-on effect of sorts to comparable better prepared lines.

Nonetheless, the 5130-strong grown and young cattle yarding, which was conducted by corporate agents, Nutrien Paull & Scollard and Elders Rural Service, provided a broad selection of all breeds, included Angus and Hereford lines and to a less degree Charolais and other Euro-breeds.

Elders auctioneer, Oliver Mason, confirmed the demand was easier on heavier drafts, and especially for those un-weaned.

With so many cattle being offered this week across the state Mr Mason said buyers didn’t need to push as hard and discounts for the un-weaned did emerge.

“That said, there were more orders in the market today and the heifer demand was better than it was yesterday” he told Beef Central

To watch his full interview with Beef Central, click below

To commence the market about 40 pens of grown steers and heifers were offered, aged between 14 months to two years.

These was mostly secured by the JB Swift feedlot operation (J&F) for its Yambinya feed yard while lighter, 16-18-month-old drafts of 29 Hereford, 421kg sold at $1800 and 32 Hereford, 388kg, sold at $1800 were secured by commission order held by Andrew Lowe.

Other sales of grown steers were secured by Melbourne processor AMG, Upper Murray bullock finishers and via the Stock live internet platform.

Topping all weaner and yearling-off sales, Swanpool, Vic breeder, David Whitechurch rang the bell with a price of $2020/head for a pen of 12 Angus, 426kg, age 9-10 months.

To watch vision of the Angus weaner sale, click below 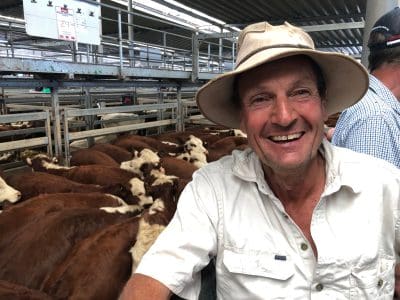 As called by Oliver Mason, the demand for heifers was improved fueled in part by further orders mainly from the north for future breeders to join.