Putting demand to its fullest test of Wednesday, a 5300-strong yarding of grown and weaner Angus cattle at NVLX Barnawartha on Wednesday sold its steer portion chiefly between $1750 and $2250 a head for a sale-average of 505c/kg.

This market was followed Wednesday afternoon, at nearby Wangaratta, with an all-black penning of 4400 weaners which saw young weaned steers make $1700 and $2070, to strike rates of 480 to 550c/kg for the heavier drafts, and up to $6/kg for selected lighter weights.

Heifers at both centres were consistently sold between $1450 and $1770 with selected lots sold higher to average around $4.80 to 5/kg (see separate Wangaratta report).

“Vendors gained the prices they had hoped for. Buyers could buy what they wanted at the rates they had envisaged, and the demand was widespread with no-one really dominating”.

At-the-rails bids were placed from several northern and central New South Wales area, also southern Queensland, South Australia along with strong local interest from either side of the border region, Mr Corcoran said. 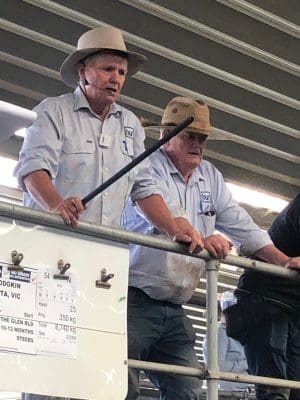 On that basis everyone should be reasonably happy, Mr Unthanks said.

“Prices are well back on last year but at the end of the day buyers have got to make money out of their purchases”.

Topping the grown and yearling-off section of the NVLX yarding was a pen of 20 Angus weighed at 489kg.

Also, among the leading steer weaner sales, sold at $1970, was a yard of 46 EU-accredited Ardrossan-blood Angus steers, weighed 388kg. 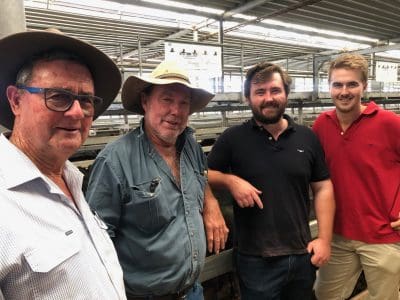 Large, well-bred and well-prepared lines of heifers drew special attention from restocker buyers from both ear and afar.