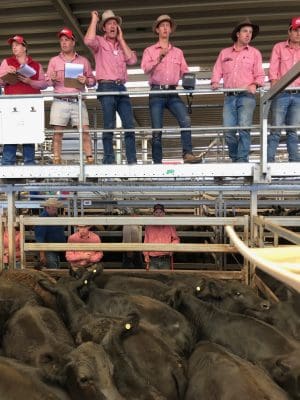 THREE large breeder lines that represented 44 percent of a 4400-strong penning provided the cornerstone to an improved demand at the Wangaratta Premier Angus and Feature weaner sale on Wednesday.

The sale, now in its third year, assembled the majority of its listing from the highly-fancied northeast Alpine cattle breeding districts surrounding Mansfield and Myrtleford along with selected other local area lines.

The stand-out feature of the sale – a 750-head consignment by Rod and Rodda Manning, Davilak Pastoral, of Mansfield drew foremost attention from a large body of buyers.

Based on Glendaloch-bloodlines and prepared with almost every treatment possible, including a Carbon Neutral Assessment by supermarket giant, Coles, the line was offered in three main drafts offering lots of 250, 223 and 198. 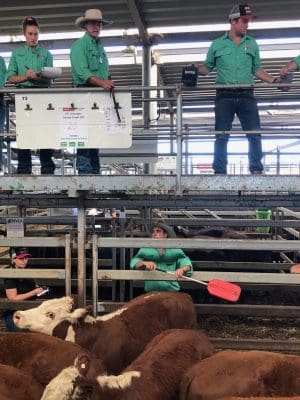 The third cornerstone consignment was contributed by K&P and M&B McPherson with operations based at Rosewhite and Bowmans Forest, Vic.

Their contribution of 275 steers and 275 heifers, by Jarobee and Alpine bulls, was snapped up in part by Elders Killara Feedlot, Quirindi and Elders Tamworth office.

However, topping the sale overall at $2120, was a pen of Steven Clarke’s Deepdale and Seaton Park Partnership Angus, 437kg, sold aged 9-10 months.

Farmed at Tallarook, Vic, these have topped all northeast weaner results to date while a second pen of 49, 385kg, made $2010.

Watch the live vision of the opening run of sales at Wangaratta as stream by Beef Central:

The sale, which was conducted jointly by Corcoran Parker and Elders, both of Wangaratta, was heavily supported by large interstate orders that were hotly pressed by local restocker interests.

CP auctioneer, Justin Keane, said the major drafts, with their larger lines, did help to draw more attention to the Wangaratta market.

“Flat line I would call it but with a heavier top end and a bit more freshness here at Wangaratta to return a couple of extra cents per kilogram and a few more dollars a head”.

Mr Keane praised the finish and presentation of penning despite overall weights being some 20-30kg in arrears of last year.

“A lot of the calves were sloshing around in water two months ago so they have finished remarkably well in the time” he said.

Honours for the top-priced weaner heifers was shared by Deepdale Pastoral, Tallarook and Pulitano Pastoral, Merrijig.

Sold at $1870/head, the Deepdale lot of 54, by Witherswood, Riga and Avil bulls, weighed 346kg while the Pulitano line of 31, by Alpine and Welcome Swallow bulls, weighed 339kg.

Most other heifer sales were made between $1450 and $1700 with odd sales higher.