US female slaughter ratio in stark contrast with Australia

THE United States beef industry is entering its third year of herd liquidation, at the same time as Australia’s first green shoots of herd rebuilding appear.

In a report published this week, Thomas Elder Markets analyst Matt Dalgleish says the US female slaughter ratio (FSR) in January opened the season at 50.5pc – well above the 47.5pc threshold that signifies rebuild or liquidation. Across the entire 2020 slaughter season, the annual average FSR reach 49.1pc, resulting in a 0.4pc decline in the US herd.

“USDA forecasts show a herd increase of 0.6pc is expected during 2021, which seems unlikely unless the FSR drops away dramatically in the coming months to average 47pc over the 2021 season,” Mr Dalgleish said.

US beef markets were a key driver of global beef values, he said.

“They are especially important to the Australian cattle market because, over the longer term, our prices tend to take the lead from the US. Indeed, the fortunes of the Australian beef sector are inextricably linked to the US as it is our primary competitor in our key beef export markets of Japan and South Korea, while also being an important beef export customer, in its own right.

“Just as we keep a close eye on the Australian cattle cycle of rebuild and liquidation, via the female slaughter ratio, we do the same for the US cattle cycle.”

Last year the US herd was in liquidation phase, repeating the 2019 trend. The US herd last year eased 0.4pc to 94.4 million head.

January data from the United States Department of Agriculture shows that the monthly FSR has come in at 50.5pc, at the upper end of the “normal” range that could be expected for January and well entrenched in herd liquidation territory. 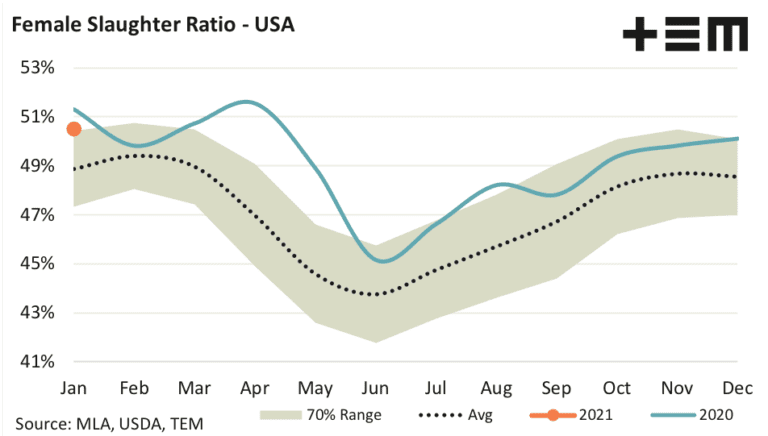 However USDA baseline forecasts for the 2021 season have the US herd growing by 0.6pc this season to reach 95 million head. 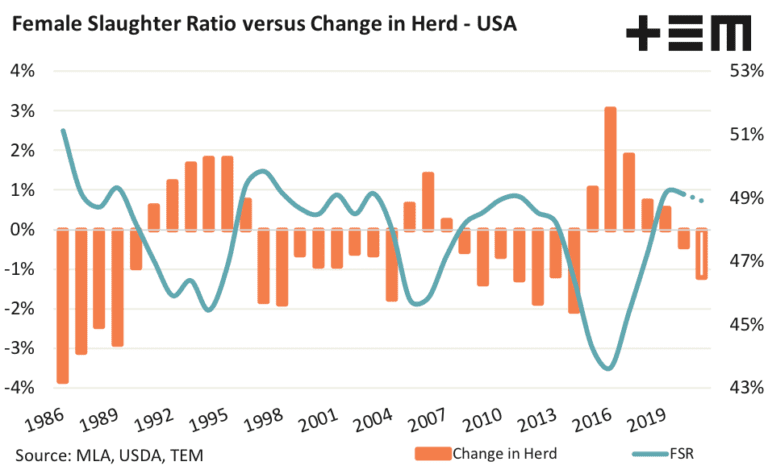 For the US herd to grow to 95 million head by the end of 2021 the FSR would need to be trending at the lower end of the “normal” range for the entire season, averaging an annual figure of 47pc and going back into a rebuild phase this season, Mr Dalgleish said.

“This seems unlikely, particularly when we assess previous US cattle cycles. Over the past century there has been eleven US cattle cycles of rebuild and liquidation. The average time spent in liquidation was six years, with the most common length of liquidation phase being four years.”