The Herefords Australia breed society took on board a call for commercial producers to gain accreditation by a major processor during the January weaner calf sales, raising the opportunity with its members and other commercial cattlemen. 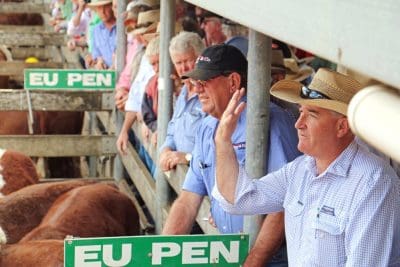 “It is not only processors but lotfeeders who are seeking EU accredited whiteface feeder steers for branded product such as Hereford Reserve,” Herefords Australia said this week.

The EU remains Australia’s highest value export market on a per tonne basis, with shipments averaging $12,610/t in 2015, with a total value of $297 million, Meat & Livestock Australia data suggests.

According to MLA market information, almost all of Australia’s 20,800t exported to the EU in 2016 was chilled, either grass and grainfed. The top 10 cuts of Australian beef exported to the EU are topside, striploin, rump, silverside, cube roll/rib eye, roll, tenderloin, chuck roll, blade, thick flank/knuckle and chuck.

At the Victorian Western District weaner sales last month, there was a strong line-up of EU accredited steers, with the majority of buyers electing to retain the cattle in the system.

Victorian commercial producers with a track record of selling EU accredited cattle have spoken of lucrative premiums for steers and heifers.

“Three years ago we were getting just above 200c/kg, and the 10c/kg EU premium on the steers made up for it – but I can’t say there was a big difference in the heifers,’’ Mr Malseed said.

He said the paperwork was not difficult and was a case of “learn as you go.”

“Reconciliation of the NLIS tag with PIC number takes a little time, however the system works well. Most years, my heifers are sold to restockers and backgrounders, and whether they stayed in the system depended on their requirements.”

“The EU has given me a slight premium over the years but if you are not in it, you are missing out,’’ he said.

“EU accreditation has provided a premium at times on the steers and heifers but it also gives me another marketing option,” he said.

“There is no difference in the paperwork as we have to keep our database up to date anyway.’’

Casterton producer Owen McClure, Beerik, was among the vendors with bigger drafts of accredited weaners at Hamilton.

“There certainly is an advantage with some buyers – the EU grid is that wide at the moment you can drive a truck through it,” he said.