“It’s like Iraq out there” was how one experienced livestock agent described some of the country he saw during a trip from the Maranoa to the channel country in Queensland’s far south west last week.

It is a description that may unfortunately be becoming increasingly apt for many other areas following a winter of below average to record low rainfall across much of Australia:

With Spring heat now kicking in, the widespread lack of feed is creating more of a speculators market than usual for store buyers, with decisions to buy now equating to a roll of the dice and a punt that rain will fall soon.

The Bureau rates the chances of above-average rainfall in October, November and December at roughly neutral for most of the country, although some areas have a slightly higher-than-normal chance, as shown in green in this latest rainfall outlook released last Thursday: 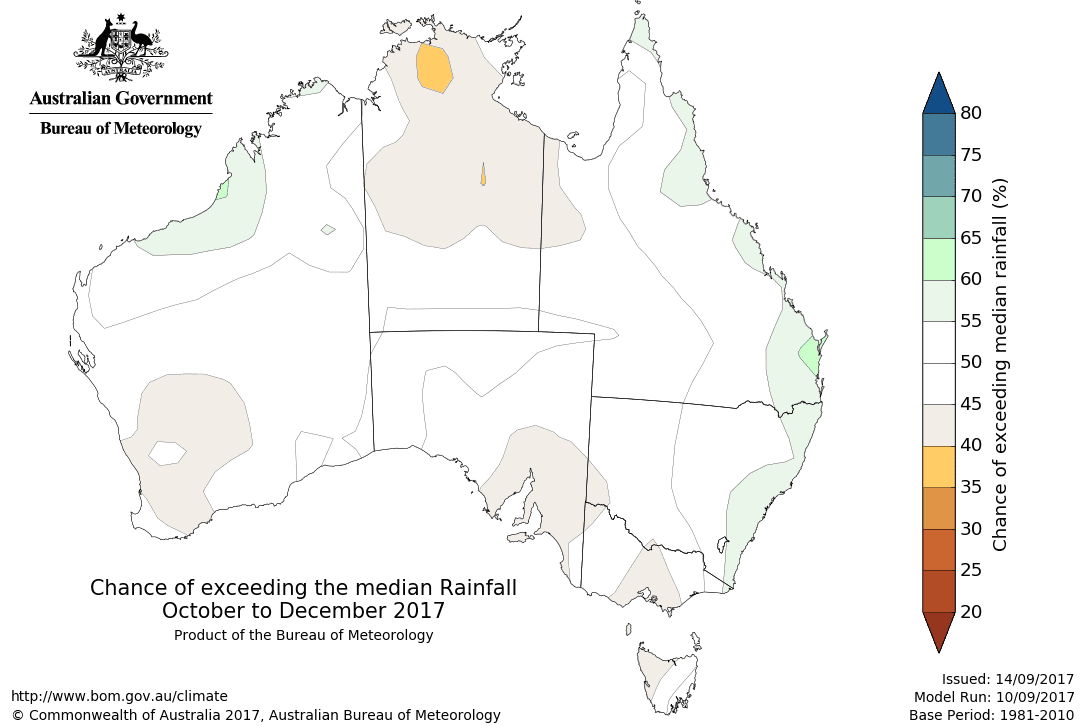 In the meantime the onset of spring heat following a dry winter is pushing more cattle onto a market already facing demand pressure from high grain prices, a resurgent Australian dollar and well-supplied domestic and export meat markets.

More than 6000 cattle are selling at Roma today, and a return to bigger yardings is likely without rain relief in coming weeks.

Agents say buying ranks will be dominated by those prepared to take a punt that rain is on the way.

“It will be the more sizzle here, not the sausage, because it will be buyers taking the punt that is going to rain,” Landmark’s Rod Turner said.

Mr Turner has just returned from a run west to the Channel Country. Apart from some parts of the Windorah district, in general feed conditions had deteriorated significantly, with many paddocks bare and many producers back to feeding cottonseed, he said.

“Hopefully it is not very far away, but buyers are speculating that if it does rain cattle will be difficult to buy, they will be very dear and in short supply, also because of the time of the year as well.

“In Dalby we’re in the market for a few clients purely taking a punt.

“Cattle are a lot cheaper per head than they were and you are not buying as much weight either.

“It is people just taking a punt that when it does rain they (cattle) are going to be short.”

The dry season has also forced the failure of many winter crops which are providing one alternative feed source for cattle.

Growers with sacrificed crops are turning their own cattle onto sacrificed crops, selling crops as feed to other producers, or have baled the crop while the chance existed.

RELATED ARTICLE: Salvaging a return from faltering crops in a tough, dry year