Steer prices trend down on AuctionsPlus due to dry conditions Commercial cattle numbers were down this week to total 7058 head with a national clearance rate of 50 percent, down 2pc from the previous week.

Steers and unjoined heifers were the best represented stock categories, making up 33pc and 35pc of listings respectively. Joined females made up 19pc or 1353 head, while cows with calves at foot and mixed sex lines made up 6pc each.

At auction, Queensland listings experienced a 38pc clearance rate, while New South Wales vendors recorded a healthier 54pc clearance. Things were looking brighter in Victoria and South Australia, where the best of the recent rain has fallen, with 72pc and 82pc clearance rates respectively.

Across the Bass Strait, competition was hot, with the Tasmanian cattle sale obtaining a 100pc clearance, all lots remaining on the island.

Cows with calves at foot sold this week averaged $1835. The top price of $2350 was paid for two lines of Angus cows and calves offered by Bruce Scott and Son, Hagley, TAS. These 3-9 year old cows had Landfall Angus sired calves at foot and have been joined back to Landfall bulls. Top price for cows and calves of $2350 was paid for these 3-9 year old Angus from Hagley, TAS.

On the mainland, a line of eight-year-old Angus cows from Wallandoon Pty Ltd, Wallendbeen, NSW, sold for $1675. Another line of 47, four-year-old Poll Hereford cows and calves from Coolabah, Young, NSW sold for $1625.

PTIC heifers reached a top of $1700 and averaged $1392 this week. This top price went to a line of Angus/Friesian heifers joined to Blonde D’aquitaine bulls. The vendor, Londrigan, Wangaratta, VIC also had another similar line that sold for $1660.

In a breakdown of young cattle sold by weight range this week: 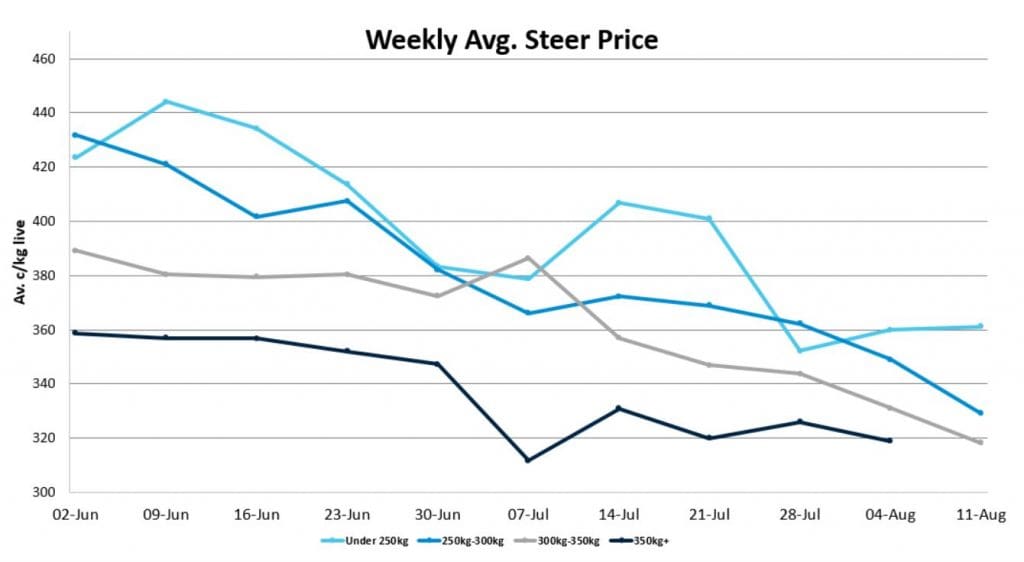