This line of 73 station-mated Droughtmaster cows and calves from Ste George Qld 407kg at 2-4 years made $1800 on Friday. Catchy C&W background tune provide for your enjoyment

YOUNG steer and heifer prices trended down on AuctionsPlus this week, after a sharp rise the week before, as numbers on offer continued to swell after recent rain.

Catalogue numbers lifted by 15 percent to 10,933 head. Steer numbers again remained strong with 4202 head offered, while breeder numbers were close behind with 4156 and heifers completed the catalogue with 2893 head.

PTIC heifers averaged $1261 and sold to a top of $1375, for a line of Shorthorn cross heifers from Narrabri, NSW. These EU-accredited heifers aged 19-20 months averaging 519kg were PTIC to Shorthorn bulls.

Young breeders averaged $1513 and sold to a top of $1845 for a line of Bongongo blood Angus cows from Forbes, NSW, aged three to four years, averaging 556kg and PTIC to Angus bulls.

Cow and calf numbers followed trend from last week with only 486 head offered. Highlights include a line of Pinnacle blood Angus cows & calves from Myrtleford, VIC which sold for $2975. These cows were rising three years 466kg and PTIC to Angus bulls, with 6 month old Angus calves at foot.

From Bell, QLD a line of Valorbrook and Glenachie Angus cows & calves sold for $2070. The cows were 3-5 years old 589kg, with 88kg Angus calves at foot and rejoined to Angus bulls. PTIC heifers averaged $1261 and sold to a top of $1375, for this line of Shorthorn cross heifers from Narrabri, NSW. The EU-accredited heifers aged 19-20 months averaging 519kg were PTIC to Shorthorn bulls. 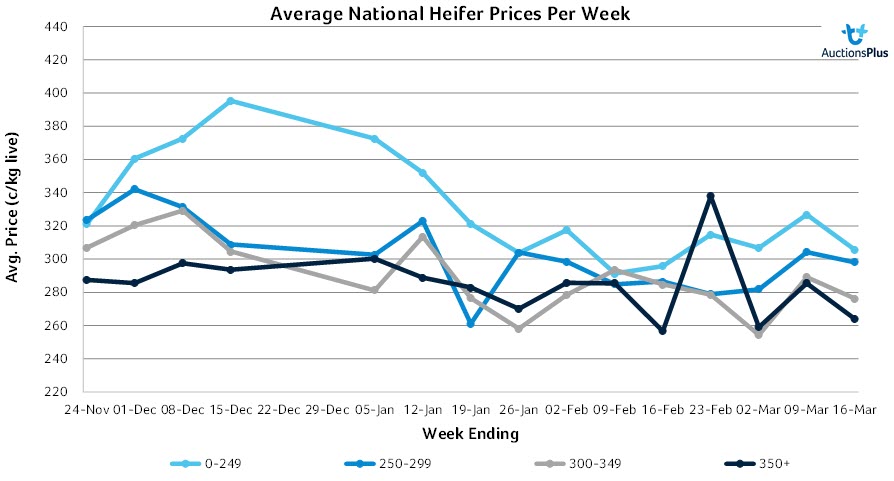