PTIC cows were hot property this week, with 82pc of the 2278 offering sold. Prices ranged from $1200 to a top price of $2900 paid for this line of 44 PTIC three year old Angus cows averaging 541kg from Tenterfield.

RECENT widespread rainfall across regions of Southern & Central New South Wales, Victoria and South Australia stimulated purchases on AuctionsPlus this week, resulting in a dearer market across most stock categories.

The most significant increase was achieved by PTIC heifers where category average prices leapt $237 to $1806 this week. Central Western NSW continues to exert an influence on purchasing, accounting for 3241 head this week.

Commercial cattle numbers were back this week with 20,489 head listed across the weekly sales, down 3365 head on the previous week. The reduction in numbers saw demand increase as most sales experienced strong clearance rates, averaging 83pc.

There were two feature sales in addition to the regular weekly sales this week, which boosted numbers. The Ray White Livestock Tenterfield & Warwick Weaner & Breeder Sale was held on AuctionsPlus for the first time. There were 2053 head offered across 68 lots which attracted 737 logins to the sale, and achieved 91pc clearance. In WA, there was the interfaced Nutrien Boyanup Store Cattle Sale with 1000 head offered across 125 lots. Onsite bidding was strong with 100pc clearance reached.

Demand for breeding stock has continued to strengthen as many farmers are taking advantage of feed from recent rain and trying to rebuild herd numbers.

Another highlight was a line of four year old Angus cows, 427kg and PTIC to Angus bulls, from Wellington NSW that made $2590. From Forbes, NSW 70 PTIC Angus cows, four years averaging 459kg sold for $2450.

Top price went to a line of PTIC heifers from the Woonoka Angus Stud Reduction Sale, which featured in the Eastern States Sale. There were 11 registered and 3 commercial heifers in the line, aged 16-20 months averaging 426kg and PTIC to registered Angus bulls.

Weaners & yearlings followed the dearer market trend this week, as there were prices firm to dearer across all categories for both steers and heifers. There were 9740 steers offered with strong demand from restocker and feeder orders.

From Braidwood, NSW a line of 45 Angus steers with Dunoon bloodlines, averaging 289kg at 8-9 months, also sold for 471c.

Feeder steers averaging 330-400kg saw an increase in prices, selling from 328c to 438c and averaging 400c, up 34c from last week.  Ireland Farming from Condobolin, NSW achieved the highest price of the category with a line of 53 Angus and Angus x Hereford steers. The backgrounders averaging 358kg, were 11-13 months and will travel to a feedlot buyer at Jondaryan in Southern QLD.

Another highlight from Alexandra, VIC was a line of Angus steers, 8-10 months averaging 352kg, which made 436c.

Heifers in the 200-280kg range also sold to a dearer market trend. Prices ranged from 331c to 496c to average 424c, up 14c from last week. Boggy Creek Station near Glenburn, VIC achieved the top price of 496c. They offered a line of 45 Paringa Stabilizer x Angus heifers, 7-8 months averaging 228kg which will remain in VIC, travelling to Pakenham.

A line of Angus & Angus x heifers from Trunkey Creek, NSW sold for 493c. The heifers have Pine Creek and Millah Murrah Angus genetics, were 6-7 months old and averaged 240kg.

Heifers suitable for the feedlot market, averaging 330-400kg, sold from 304c to 412c this week. They were the only category to experience a decrease in prices, back 4c, to average 368c. S & S Palmer from Wagga Wagga, NSW achieved the top price of 412c with a line of 36 Angus heifers. The Witherswood and Waitara blood heifers were 12-13 months averaging 342kg. From Armidale, NSW 19 NSM Charolais heifers, 17-24 months averaging 393kg, sold for 394c.

Heifers heavier than 400kg averaged 348c this week, up 9c from last week, as prices ranged tightly between 404c and 408c. Top price was returned by a line of 44 Angus heifers 18-20 months averaging 409kg from Toobeah, QLD, which will cross the border into NSW. 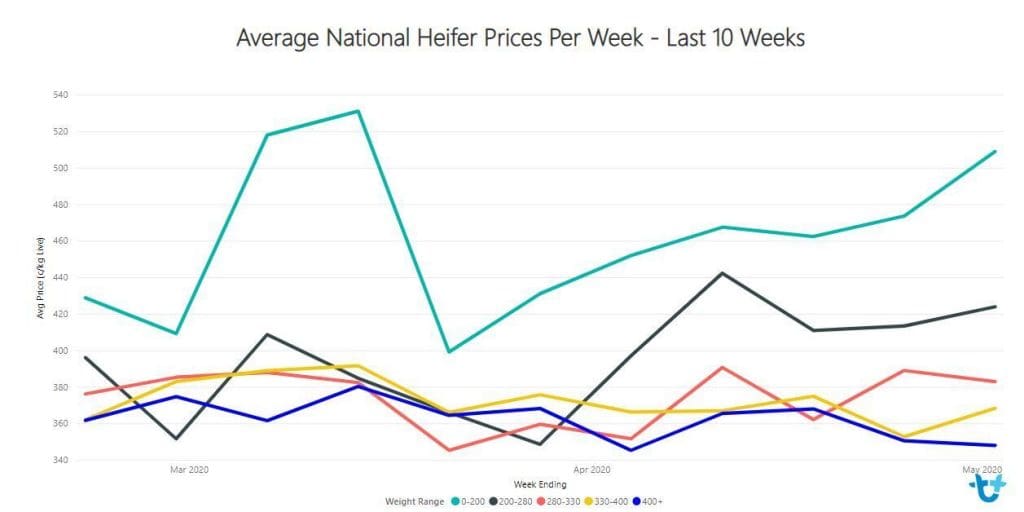 In Tasmania, numbers lifted again this week, with 526 head listed. Demand remained strong as the sale achieved 92pc clearance with 484 head sold. Of those sold, some lots will cross the Bass Strait onto the mainland, heading to regions in the Riverina & Central NSW and Northern VIC.

Some notable highlights from the sale included two lots of Angus cows with CAF offered by Bison Management of Erriba, which sold for $2250 and will travel to Yeoval, NSW. The top-priced weaners at $1570 were a run of composite weaned steers, offered by D T Cox from Nowhere Else. The 12-13 month old steers averaged 473kg.