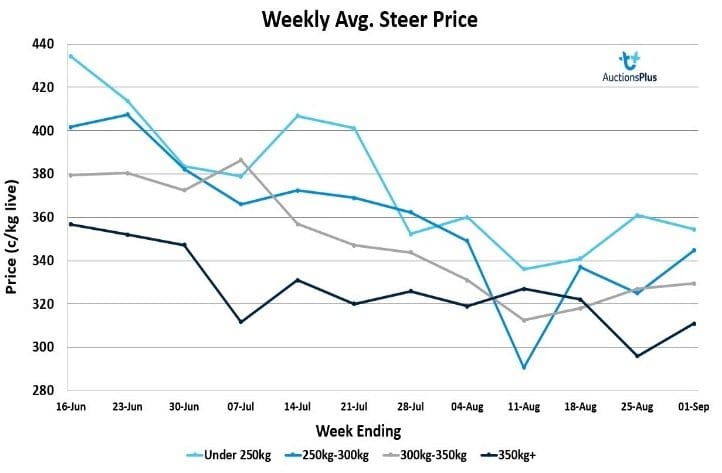 WITH winter now behind us, cattle numbers rose this week to 6192 head, an increase of 739 on last week’s listings.

The increase in numbers brought with it an increase in buyer confidence, with the clearance rate of 72 percent at auction up 14pc from the previous week.

Predicted above average rainfall and temperatures for parts of the eastern seaboard heading into spring could lead to stability in the weeks ahead, AuctionsPlus suggested.

With the exception of heifers and steers less than 250kg, all other weight ranges among young cattle rose in price this week.

The pregnant female market this week peaked at $2320 for a line of Charnock blood Poll Hereford cows 30 months to six years, with 240kg calves at foot, from Condah, Victoria. These girls, AI’d to Poll Hereford bulls sold well over reserve.

Cow and calf units were dominated by NSW listings and strong competition saw the majority of lots selling well above reserve. Units averaged $1647, selling to a top of $2030 for a line of Angus x Poll Hereford breeders from Coolamon, NSW, with calves sired by Ireland Angus and Limflex bulls.