SHARP rises continued in most young cattle categories on AuctionsPlus this week, where an offering of 10,843 head achieved an 89 percent clearance across all three sales.

Southern Queensland, the North-West Slopes & Plains and the Northern Tablelands, areas that have had significant rainfall in recent weeks, continued to dominate buying.

A smaller offering of cows and calves attracted strong bidding interest, up $787 on average compared with the week before. Prices ranged from $1920 to $3000, averaging $2462.

Buyers from the Northern Tablelands purchased cow & calf units for $2830 all the way from Euroa, VIC. The 26 Angus station-mated cows 456kg had 4-5 month old calves at foot.

Another highlight was a line of registered stud Droughtmaster PTIC cows and calves offered by Ambleside Droughtmasters, Lawgi Dawes, QLD. The cows were 3-8 years averaging 464kg and were PTIC to Droughtmaster bulls, with 3-5 month old calves at foot.

PTIC cows also had a reduced offering this week with 494 head on the market, down 596 from last week.

Out of Myrtleford, VIC a line of 44 EU accredited purebred Angus cows 587kg at 5-6 years, due to calve in early August which sold for $2200. They will remain in VIC, travelling to Corryong.

Numbers of PTIC heifers remained steady on last week, with 505 head offered. Keeping with the upward trend of prices, PTIC heifers sold from $1290 to $2460 and averaged $1797, up $37 from last week. Top price was achieved by 28 EU accredited 17-18 month old Angus heifers 474kg from Ghin Ghin, VIC, PTIC to Angus sires.

Feeder steers 330-400kg sold from 317c to 459c, averaging 408c, up 30c from last week. Top price was achieved by 67 weaned Angus steers, 10-11 months averaging 342kg from Tenterfield, NSW. In this stock category, there has been a significant amount of bidding activity from feedlots in recent weeks. A feedlot in Northern NSW purchased a line of 100 Te Mania/Ardrossan blood Angus steers all the way from Port Fairy, VIC for 457c.

The 17-18 month old steers originated from Nundle, NSW, and travelled down south to agistment last Spring which allowed them to grow out to 348kg. 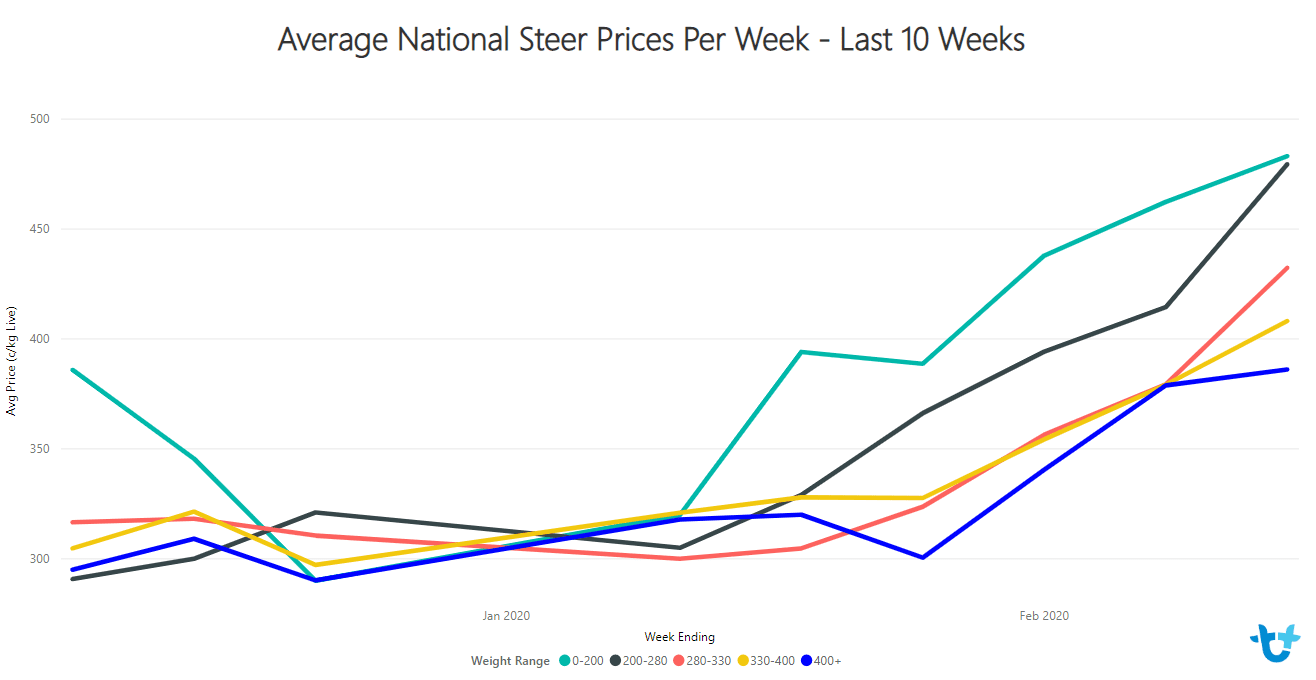 From across the border in Narrandera, NSW, 46 Reiland Angus heifers 7-8 months averaging 205kg sold for 444c, to a buyer in NSW. From Hartley, NSW, a line of majority Limousin X heifers 4-6 months averaging 213kg made 433c.