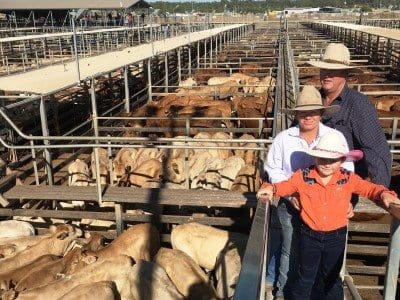 Yarding numbers remained the same as the previous sale. The quality of steers penned was plainer and buyers were more selective when purchasing. Extra feedlot buyer competition helped boost light and medium weight yearling heifer prices by 8c to 11c/kg.

Brahman-cross cows with 2 to 6 month old Charbray calves at foot sold to $1,510 and across the board cows and calves averaged $1,329/unit.

A total of 6000 head of cattle were consigned at Roma’s Store Sale.

A pen of Brahman-cross cows with Charbray calves at foot made to $1510/unit and across the board cows and calves averaged $1,329/unit.