Yarding numbers declined 65pc after some good rainfall across some of the usual supply areas over the weekend. The quality of cattle penned varied from plain to good quality steers and heifers. Fewer restockers were present at the sale, but those in attendance displayed solid demand for good light weight yearling steers and heifers. All the usual commission feedlot buyers were active and prices remained similar to the previous week for medium and heavy yearling steers, while good quality medium weight heifers jumped 9c/kg. The major export processors showed increased demand for the small yarding of cows. Cows and calves topped at $1000 and averaged $761/unit. 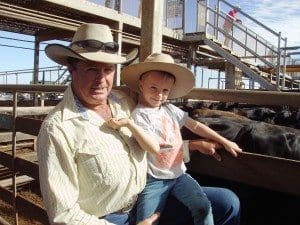