Numbers increased by 26pc and the overall standard was boosted by some large runs of good quality cattle.

Restockers and feeder operators took advantage of the well-bred lines of yearling steers and lifted average prices by 5c to 8c/kg. A similar trend developed on the yearling heifers with most making 12c to 18c/kg above the previous weeks averages. Additional export processors were in attendance and operating in the cow section, however not all made purchases with average prices fully firm to dearer.

A small selection of heavy grown steers to export slaughter made to 316.2c to average 314c and a couple of bullocks made to 307.2c/kg. Medium weight plain condition cows sold to restockers at an average of 238c with sales to 240.2c/kg. The best of the medium weights to export processors made to 254.2c to average 247c/kg. A fair number of good heavy cows reached 267.2c with most close to 257c/kg. Heavy bulls made to 271.2c/kg. Cows and calves sold open auction and made to $2,010/head. 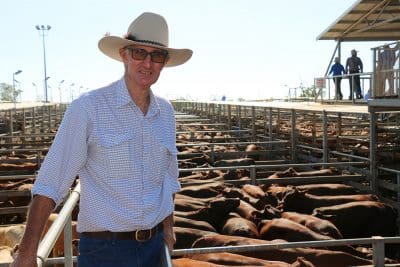 A total of 4740 head of cattle were consigned at Roma’s Store Sale on Tuesday.

There will be no Prime Sale on Thursday, 26 January 2017 due to the Australia Day Public Holiday.