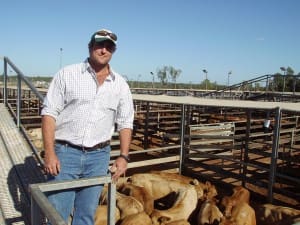 The good quality yearling heifers remained firm in price, but a combination of plainer quality and softer buyer demand resulted in 7c to 13c fall in most other categories of yearling heifers. The store and 3 score cows were 20c/kg cheaper and the top end of heavy 4 score cows were similar to the previous prime sale prices. Cows and calves sold to $1,000 and averaged $701/unit.