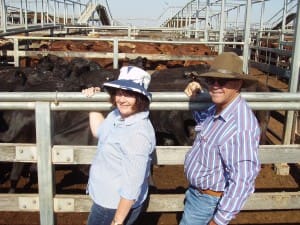 Yarding numbers lifted 15pc on the previous week, but the quality of cattle across all categories declined. Despite the plainer quality offered, solid interest from restocker buyers lifted light weight yearling steer prices by 6c to 7c/kg. There were only a few heavy weight yearling steers sold and prices remained similar to the previous store sale. There was a noticeable price gap between good quality light and medium weight yearling heifers and plainer D muscled drafts. All the usual feedlot and processor buyers were operating on the yearling heifer classes, plus an extra restocker buyer returned to the market and purchased 2 score store cows for up to 119c/kg.