Oliver Mason, Elders said sales of light heifers were also well off the pace some easing by as much as $100 a head in places.

Teys Charlton Feedlot and commission buyer Andrew Lowe were the main buyers of the heavier cattle Mr Mason said however pickings of these were slim.

The result overall he said was reasonable given the mixed quality of the penning.

“The number of large quality vendor-bred lines was limited, Mr Ivone said, as was the number of cattle offering weight”.

“The steer penning in particular was mainly a yarding for the local restocker with only odd yards suited to the volume lot feeders”.

A feature of the Elders-PSN April sale was the complete dispersal of the HG & SA Bawden, “Kilchamaig” Spry-blood Shorthorn and Shorthorn-Angus breeding herd. 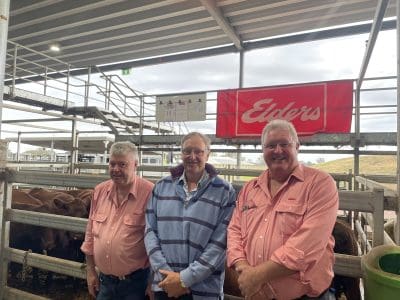 Pregnancy tested in calf to Spry Angus bulls on a 12-week November to February joining, the Bawden cows were sold according to colour (i.e.; Reds, Red Roans, Blue Roans) to $2980, average $2571 or 442c/kg.

Weights of the Bawden steer and heifer weaners ranged from 162 to 284kg.

Meanwhile sales of calved females were limited and mostly made between $2680 and $3880 per outfits.

Included in these sales were yards of Charolais- and Speckle Park-cross heifers, with Speckle Park calves-at-foot and re-joined to Speckle Park bulls that made $2820 to $2960 for NSW vendor, Malvern of Mayrung.

The selling of steers opened on a yard of five Charolais weighed at 588kg.

Some larger pen lots of spring-drop weaners were included in the sale.

A further feature of the April sale was a draft of 270 Angus-Simmental and Angus Composite -cross weaned mixed sex weaners, seven to nine months by Wormbete and Brewer Simmental and Hicks Composite-blood bulls.