DRIVEN by relentless global demand and local supply constraints brought on by two years of drought, prices for Certified Organic slaughter cattle across Australia have reached stratospheric levels over the past four weeks.

The Organic segment has defied this year’s broader price trend for conventional slaughter cattle, which has seen direct consignment prices in southeast Queensland decline by around 45c/kg or 8 percent since December.

Instead, based on the current Teys Australia grid, certified organic slaughter cattle are now at all-time record levels. The current Queensland grid (southern kills 10c less) shows up to 730c/kg carcase weight for heavy steers, and an unbelievable 710c/kg for best eligible cows 300kg or more. Even lighter cows +260kg are still 700c.

Even allowing for grid penalties, many of those cattle would be coming back at late 6’s or early 7’s, a regular supplier told Beef Central.

Compare those figures with the Teys Beenleigh grid this week for conventional cattle, where similar (non HGP) steers are this week quoted at 495c/kg, and cows 445c. It means a 330kg certified Organic heavy steer is this week worth 235c/kg, or $775 more, before grid penalties.

On top of that, the organic grids are some of the ‘flattest’ ever seen, both in terms of weight tolerances, and just 20c/kg separating milk-tooth heavy steer and cull cow. That’s because one of the strongest portions of the Organic export market presently is manufacturing meat for the US burger restaurant and retail sector. 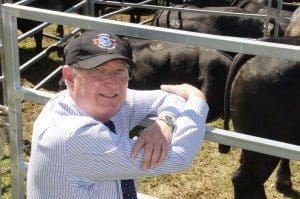 Teys general manager livestock, Geoff Teys, confirmed that the current grid price level, which had been in place for the past four weeks, was the highest the company had offered since it started its Certified Organic program in 2012.

“It’s being driven by the combination of very strong international demand for USDA certified organic product, and the cattle supply difficulty that all producers in Australia are facing this year,” he said.

“Despite the money on offer, we’re still short of Certified Organic cattle. We can’t get enough – that’s why the price is where it is – it’s supply and demand.”

Mr Teys said the company was processing runs of certified steers at present that are averaging 720-725c/kg after grid adjustments.

“One mob last week averaged 340kg, carcase weight, returning the vendor around $2400 a head,” he said.

Mr Teys agreed that current price levels were likely to stimulate more producers to consider conversion to Certified Organic status. “Producers no longer have to wait three years to achieve full Organic status,” he said. “There are ways they can go straight in.”

Another Organic beef supply chain, Arcadian Organic & Natural Meat Co, says the grid price figures published above are representative of payments under its ‘program-based’ business, which does not circulate grids.

Chief executive Alister Ferguson said while there had been an increase in numbers of producers adopting Organic certification, the drought over a number of important eastern Australian organic production areas had largely countered any prospect of expansion in overall Australian Organic beef production, for the time being.

“A lot of our established, long-term Organic suppliers are back on numbers – perhaps by 30-50pc – so that is more or less cancelling-out the new suppliers coming on stream, for now,” he said.

“A lot of our Organic suppliers are still doing it fairly tough, season wise – they’re not out of the woods yet.”

“There are certainly more producers coming on-stream as Organic suppliers – but as always, given the overwhelming international demand, probably never quick enough. But potentially, had we not had three years of drought, we would be in a much better supply position.” “But it will remain tight, for the time being – I have no doubt,” he said.

“In the past week we have started to see a lot of our suppliers wanting to start to sell early due to the expected April rain that really hasn’t eventuated. That, in conjunction with getting closer to the start of winter and frosts, may see these higher prices start to ease in the short-term from the increase supply – however it may potentially create further supply constraints for Organic cattle into the back half of the year,” Mr Ferguson said.

“The issue with this is that we are very much a program business. While the ups-and-downs in supply is something we have to deal with, being a grassfed business, it does come with its challenges.”

Risk of being priced out of the market?

Unlike the conventional slaughter cattle markets which had eased during the first four months of this year, the Organic cattle market had continued to rise – even in the face of an appreciating Australian currency, rising around US9c since January.

“Despite this, Australia needs to be careful that it does not price itself out of the global organic beef market,” Mr Ferguson warned.

“Uruguay now has a substantial Organic beef program, and they are offering up product at cheaper money,” he said. “Other Organic producers, like Brazil, also look like accessing a broader range of international markets.”

“If prices simply keep rising, the Organic beef industry will lose business, as it hits consumer resistance. It’s happening to some extent already. Currently, stakeholders are trying to buy into the market, and paying what they need to pay to extract the cattle, rather than taking a longer-term view. But that is just the way the market functions.”

“But I think we are definitely seeing Organic meat market prices cap-out on where we can push them to. Some items are trading at a higher premium than others, but it is certainly all at a very significant premium,” Mr Ferguson said.

“Certified Organic trim is probably the standout performer at the moment, especially into the US. Basis that, there is a very large disparity between conventional and Organic trim. But in a perfect world, Organic trim should not shoot up and down, because a lot of it is produced out of program business with livestock suppliers, not bought on a spot commodity basis.”

Currently lean 90CL imported conventional grinding beef into the US is worth around A550c/kg wholesale, while Certified Organic is perhaps 200c/kg above that, Beef Central was told.

Alister Ferguson’s advice for producers considering seeking organic certification, is that it is important to align with an organic market supply chain.

“Organics is not a commodity business, and the supply chain needs to be managed carefully as it doesn’t handle large spikes or slumps in supply like a spot market can.”

“To achieve the higher premiums paid for Organic on an annual basis, we need to know what cattle we have coming forward one to three years out, so we can ensure that when the supply increases we have developed markets to take the supply on. A sudden large sudden rush of supply could actually be detrimental to the Organic beef market,” he said.