Part of a line of 812 PCAS-eligible Santa yearlings, account Barcaldine Downs Pastoral Co from Alpha, Central QLD, aged 11-15 months with the steer portion selling from $945 to $1070.

RECORD cattle numbers were offered on AuctionsPlus this week, with listings totalling 14,292 head excluding re-offers left unsold from the week before, and 17,000 including re-offers, across six commercial sales.

Queensland had the strongest clearance rate of 50pc this week, however more sales were expected to be completed before Monday.

With a prolonged tough season in some areas and an uncertain long-term weather forecast, AuctionsPlus suggested it was important for vendors and agents to have the conversation about putting stock up with realistic reserves. “Don’t start them where they should finish,” was AuctionsPlus’s advice to the market.

Joined females were in abundance with 4560 head on offer. PTIC cows averaged $1362, reaching a top price of $1820 for a line of seven-year-old Angus cows and calves from Bingara NSW.

In Queensland, a line of 88 Brahman cows PTIC to Charolais bulls out of a high-fertility herd offered by David and Michelle Fryer from Railview, Prairie, east of Hughenden sold for $1075.

Joined heifers averaged $1271 this week and reached $1550, for a line of Angus heifers from Inverell, NSW, PTIC to Angus bulls. A line of Angus cows 5-8 years from Benalla, VIC, PTIC to Lawson Angus bulls made $1160.

Cow and calf numbers were down slightly for an offering of 460 head. Decent listings out of NSW boosted numbers and prices averaged $1758. Top price of $2030 went to a neat line of NSM Angus heifers 24-28 months, with calves, from Boorowa NSW.

In Queensland, two lines of Santa/Droughtmaster NSM cows 3-9 years from Goondiwindi, and calves, sold for $1600. Patsy Cline fan, David Fryer from Railview, near Prairie in North QLD, sold this line of 88 Brahman cows PTIC to Charolais bulls for $1075.

A large listing of 812 PCAS-eligible Santa yearlings, account Barcaldine Downs Pastoral Co from Alpha, boosted numbers out of Queensland this week. Aged 11-15 months and offered over six lots, all of these yearlings sold at auction, with heifers averaging $675, and the steer portion selling from $945 to $1070.

Cattle numbers in WA were up this week with a total listing of 248 head in regular sales, reaching a top price of $1350 for a line of Angus yearling steers 511kg at 15-16 months from Boyup Brook which sold for $1350.

Tasmania had 85 head on offer this week, achieving a 100pc clearance. Top price went to a line of Poll Hereford/Angus weaner steers from Ellendale, averaging 337kg, which sold for $1145.

In a breakdown of young cattle sold this week by weight range: 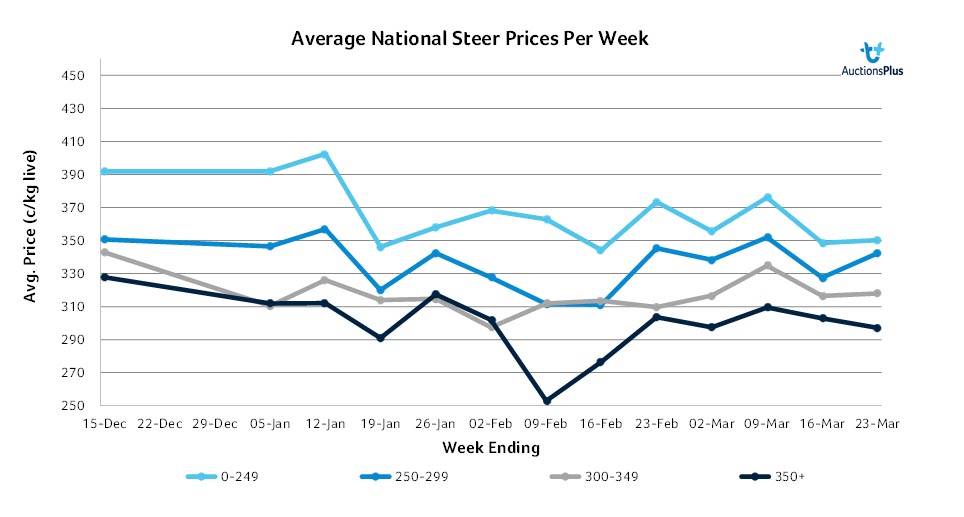 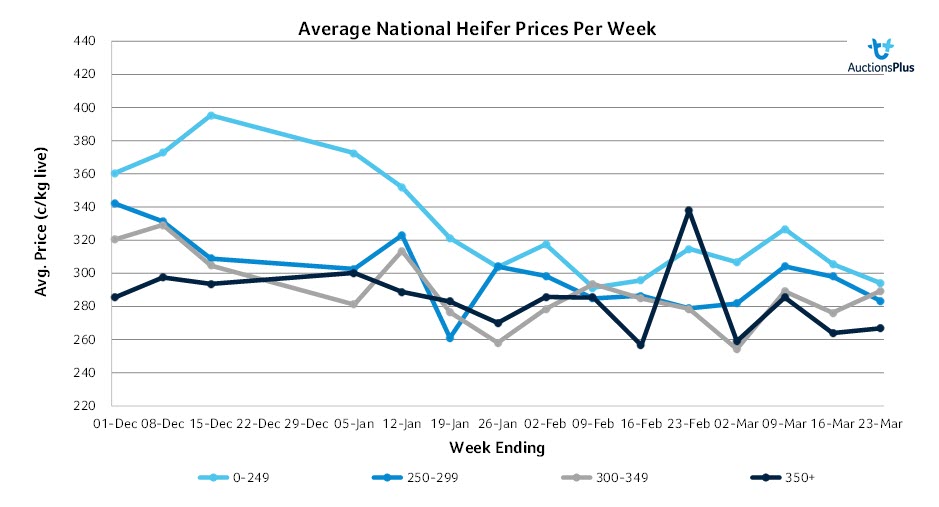