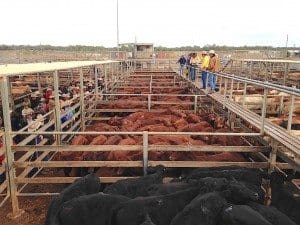 Australia’s largest individual cattle selling centre had its largest ever year in terms of sales volume and value in 2015.

That added up to almost $327 million worth of cattle, boosted by higher cattle prices throughout the year, making the total the highest total dollar value for annual cattle sales on record at Roma.

Extensive drought conditions resulted in more cattle being sold in 2015, which helped to drive the record yarding.

“Another contributing factor was the large increase in the value of cattle, which has enabled livestock producers to turn-off cattle at a younger age,” Mr Hyland said.

“Let’s wait and see seems to be the general attitude of cattle producers about the current weather and season,” Mr Clanchy said.